The year 2021 will give a fresh lease of life to one of the most significant iconic heritage structures of Visakhapatnam: the 120-year-old Town Hall. After years of neglect that reduced the grand edifice to a shadow of its glorious past, the Town Hall restoration project was finally taken up in 2019 by the Greater Visakhapatnam Municipal Corporation (GVMC) and executed by Savani Heritage Conservation. Being carried out at a cost of ₹3.4 crores, the project is nearing completion and will be ready by February.

“The project will be a classic example of how scientific restoration of heritage sites can help preserve the basic character of such ancient structures,” says Mayank Kumari Deo, Convener of INTACH – Visakhapatnam Chapter. Work on Town Hall demanded a lot of expertise. “The Gothic structure has two tiled conical roofs and the core support material is made of Burma teakwood. Even the flooring is made of wood,” says Edward Paul, a history expert who has extensively researched the history of Visakhapatnam.

The Burma teak wooden flooring has been restored with utmost care, using similar material only in sections where the wood has decayed. The restoration project also includes landscaping work around the Town Hall, an amphitheatre and a parking space.

Built by the Maharaja of Bobbili in 1901, in memory of Queen Victoria, the Town Hall was originally called the Victoria Diamond Jubilee Town Hall, and was handed over to the municipality in 1904. Years of neglect endangered the stability of the structure with the roots of vegetation growing through walls, resulting in cracks and mortar loss. The Town Hall has been witness to fiery speeches delivered by freedom fighters, including Mahatma Gandhi, who addressed a gathering here in 1929. It also saw eminent personalities such as C Rajagopalachari, Sarvepalli Radhakrishnan, CV Raman, Rabindranath Tagore and MS Subbulakshmi speak and perform here. It is the only surviving building in the district with a massive wooden floor made of Burma teak.

“Conservators are not adding anything new. Going forward, the authorities now need to preserve the structure and make it a cultural hub for activities like art shows and literary activities,” says Deo.

At the mention of the word ‘heritage’, decrepit monuments and structures ravaged by time come to mind. But, what comprises intangible heritage is sometimes shadowed. INTACH’s Chennai chapter (Indian National Trust for Art and Cultural Heritage) aims to bring the focus back to this aspect, for the New Year. “Most of heritage stems from geography. Be it, rivers, lakes, streams, mangroves, swamps…they are all part of natural heritage,” says Sujatha Shankar, architect and convener, INTACH, Chennai Chapter. She adds: “Folk art and music, oral traditions, tribal rituals and local practices [specific to a region] fall under this.”

In 2021, INTACH is looking to document and bring that folk artform of shadow puppetry or tholpaavaikoothu into mainstream performances in Tamil Nadu. “[In this artform], the artistes work as a unit. While the husband makes the puppet, sons and daughters sing or wives/cousins take care of the leather work on the puppets… it’s all a network. But, now with urban occupation, people are staying away from being involved in the artform,” says Sujatha. In Tamil Nadu, the artform has been more for a limited audience, mostly in temple festivals and village squares. In 2020, INTACH raised funds to support shadow puppeteers who are going through a financial crunch during COVID-19, in Kanyakumari, Salem, Thirunelveli and Nagercoil.

This year, they hope that the Bharat Insurance building (built in 1897 and originally known as Kardyl Building) situated at Mount Road (opposite to Higginbotham’s bookstore) will be taken up for conservation. “Bharat Insurance is one of the most beautiful, eclectic buildings that has taken the Indo-Saracenic architecture of Madras to a different level,” adds Sujatha. Apart from that, Victoria Hall situated inside the Government Museum, Egmore, too has been undergoing restoration under the efforts of Greater Chennai Corporation,” adds Sujatha.

According to her, heritage tourism had taken a major blow last year. “However, virtual tours and events do keep the spirits up,” says Sujatha.

“All renovation and conservation projects should be carried out in strict adherence to the rules formulated by the Archaeological Survey of India,” says Dr S Hemachandran, former director of Archaeology, Kerala. Right from the material to be used and the method of construction, lighting and wiring to the colour and design, everything has been laid down in great detail in the ASI regulations.

“In Kerala, conservation of heritage buildings even in the public sector, some more than a 100 years old, come under different departments such as the Public Works Department, the Tourism Department and so on. Unless the Government takes a decision to formulate comprehensive guidelines for all conservation activities, the work will continue to be haphazardly done,” he asserts.

“For instance, the roof of the 100-plus-year-old Women and Children’s Hospital in Thycaud, the first of its kind in Kerala, is now covered with a tarpaulin. I suspect the authorities plan to replace tiles with sheets, completely spoiling the design of the building,” he says.

“Once the Government formulates a policy that heritage buildings or sites, irrespective of whether it be in the public or private domain, be conserved in accordance with the rules, it will save several buildings, including schools, colleges, ancient public offices, from destruction and wrong conservation methods,” he says. Special rates would have be accounted for since conservation takes time and is an expensive process. 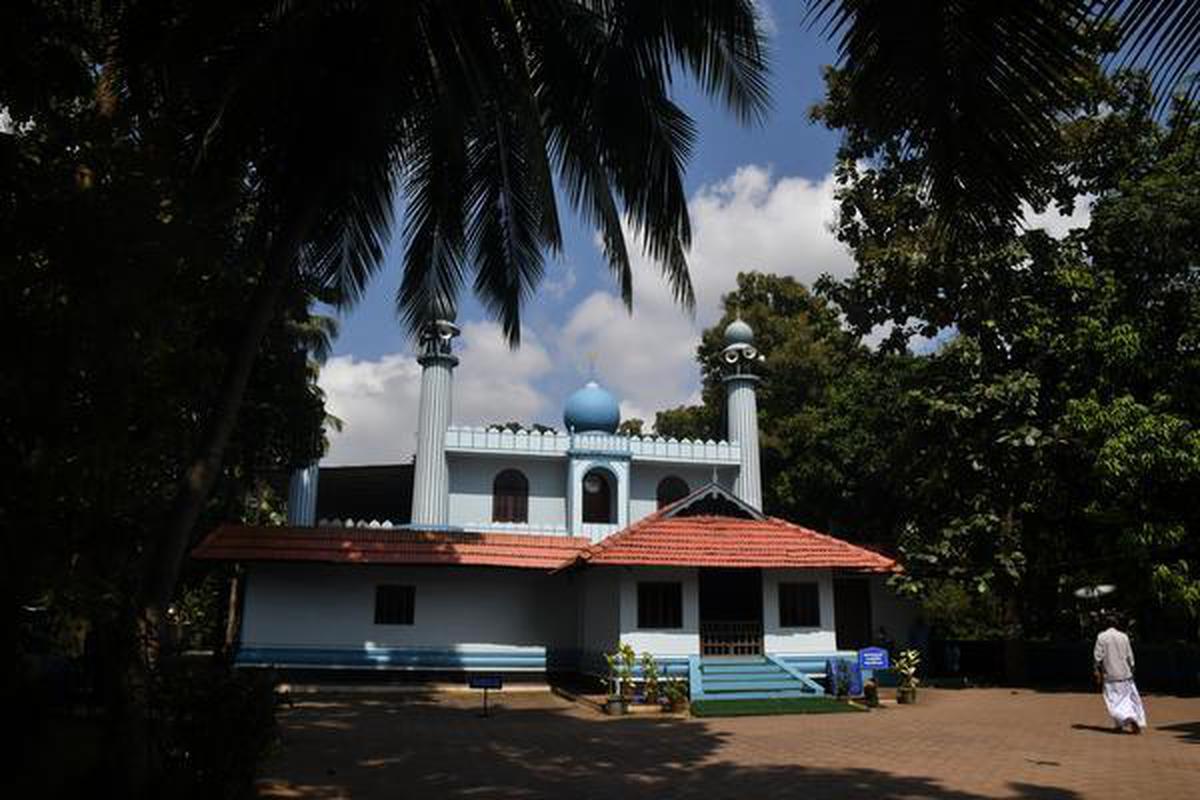 Cheraman Juma Masjid in Kodungallur. The 1,400-year-old mosque, believed to be the country’s first and oldest mosque, will soon be restored to its original form

The Cheraman Juma Masjid, considered the oldest mosque in India, is one he commends for the way in which the conservation is being currently being carried out under the guidance of architect Benny Kuriakose. “This will give a new direction to conservation efforts in Kerala. Although the original building remained untouched, additions were made around it. The Cheraman Juma Masjid Mahal general body (usually entrusted with the administration of the mosque) unanimously decided to revive its original structure, took the necessary permissions and work is going on the basis of an old photograph of the mosque as it existed before the alterations and a model has been made of it,” he says.

However, he rues that all over Kerala several ancient churches are demolished to build new ones or are tied in legal tussles.

Of the many projects completed recently, he highlights the conservation of the nearly 120-year-old Thrissur Ramanilayam (which is being used as a Government guest house) and Vadakumnathan temple and the Koothambalam at Guruvayoor, which won the Asia-Pacific Award of UNESCO. All the three were carried under the leadership of architect MM Vinodkumar.

The first phase of the ambitious Alappuzha Heritage Project was completed on Novermber 3, 2019. It included several initiatives such as the renovation of the 150-year-old sea-bridge and development of 20 new museums in conserved warehouses and buildings belonging to the Port Trust and also different communities that had made Alappuzha their home. Once known as the Venice of the East, the ₹208.25-crore AHP includes developing museums devoted to yarn, coir, the labour movement and so on.

Another project he highlights is the Travancore Heritage Project, which covers heritage sites from Padmanabhapuram Palace in Kanyakumari district in Tamil Nadu to Aranmula Parthasarathy temple in Aranmula in Kerala. It includes the Attingal Palace too.

Among the buildings in Kerala that is in dire need of conservation he lists the Secretariat building in Thiruvananthapuram, the residencies in the capital city and Kollam, University College, heritage schools in Kerala and certain places of worship.

No plan for law against conversion: MHA

Coronavirus | COVID-19 vaccine for people over 50 years from March