Derided by the BJP as a mascot of the criminal-and-mafia raj during Akhilesh Yadav’s previous rule in Uttar Pradesh, jailed don-politician Mukhtar Ansari is out of the poll fray this time and his son is instead contesting as the opposition alliance candidate from his Mau seat.

Union Home Minister Amit Shah and other BJP leaders have been taking Mukhtar Ansari’s name to attack the Samajwadi Party on the issue of law and order and how the Yogi Adityanath government ran bulldozers on his properties.

Mukhtar Ansari’s 30-year-old son Abbas Ansari has been fielded in the election by the Samajwadi Party’s ally Suheldev Bhartiya Samaj Party (SBSP) of Om Prakash Rajbhar as the coalition nominee in the seat, where voting will take place in the seventh and last phase on March 7.

The BJP has nominated Ashok Singh from the seat, while the Bahujan Samaj Party has fielded its state president Bhim Rajbhar and the Congress Madhavendra Bahadur Singh.

Om Prakash Rajbhar had earlier declared Mukhtar Ansari as his party’s candidate from the seat, but when the process of nomination began in the seventh phase, Abbas Ansari filed his nomination papers instead.

The BJP and BSP candidates have been making an issue out of Mukhtar Ansari’s criminal image and have appealed to people to free Mau from the mafia.

But Abbas in conversation with journalists, on the contrary, accuses the ruling BJP of protecting mafias of a particular caste.

He alleged that under the protection of those in power, Brajesh Singh, said to be an aide of underworld don Dawood Ibrahim, fired bullets at his father in 2001.

Abbas also quotes data from the National Crime Records Bureau (NCRB) to claim that there has been a huge increase in the crime rate in Uttar Pradesh in the last five years.

Though he is the face, the force behind the son in the polls remains the father.

Abbas said, “Chief Minister Yogi Adityanath while sitting on a constitutional post is intimidating the people of UP that if they do not vote, their homes will be bulldozed, but the land of martyrs saints Mau will not fall for the forgery and communal agenda.” He claims in his poll meetings that with the blessings of Mukhtar Ansari, Om Prakash Rajbhar and Akhilesh Yadav, he is standing before the people.

Mukhtar Ansari, who has been in jail since 2005 in various criminal cases, was brought to Banda jail by the Uttar Pradesh government from Punjab after a court battle in April last year.

According to sources, Mukhtar Ansari is also keeping an eye on the son’s election from Banda jail and his old supporters have become active in his native assembly seat.

However, this time Mukhtar Ansari’s elder brother Sibakatullah Ansari, who has joined the Samajwadi Party, and his BSP MP-brother Afzal Ansari are nowhere to be seen in the election campaign in Mau area.

Afzal Ansari neither came for any programme of his party BSP nor his nephew Abbas.

BSP worker Achhe Lal claimed that Afzal Ansari remains loyal to the BSP and that he is not keeping well these days.

Abbas is moving around wearing a red cap — the Samajwadi Party’s trademark headgear — and a yellow gamcha, worn by SBSP supporters.

Gulab Singh Yadav, a college teacher associated with the Samajwadi Party, said that it is not about Abbas Ansari but the alliance of SBSP has strengthened Akhilesh Yadav in Purvanchal.

Ajay Prakash Singh ‘Manna’, brother of BJP candidate Ashok Singh, was shot dead at Ghazipur Tiraha in 2009 and the matter is pending in the high court.

The BJP nominee is pleading with the voters that Mukhtar Ansari is committing crimes from jail after gaining power for 25 years and now if his son also wins then crime incidents will rise.

At the same time, he does not forget to mention that the common man heaved a sigh of relief by the bulldozer launched by Yogi Adityanath on the illegal properties of these mafia and this is possible only if the BJP government is formed.

Abbas is no novice in the election as he has been handling the poll management of his jailed father in the last two elections.

He, however, had lost in 2017 state polls from neighbouring Ghoshi as a BSP nominee in the hands of now Bihar Governor Phagu Chauhan.

There were many myths in the area regarding the Mau assembly constituency.

Since 1952 nobody won from Mau for a second consecutive time, but Mukhtar Anasri broke the myth by winning the seat five times in a row since 1996.

Manoj Rai, the district panchayat president of Mau who is actively campaigning for the BJP candidate, told PTI, “Everything has an end and this time Mukhtar Ansari himself broke his myth by staying out of the elections.” There are about five lakh voters in Mau assembly constituency, including 1.25 lakh Muslim voters, one lakh Dalit voters and 55,000 Rajbhars.

This is the first election in Mau when only one Muslim candidate is in the fray from among major political parties and this could of an advantage for Abbas Ansari. 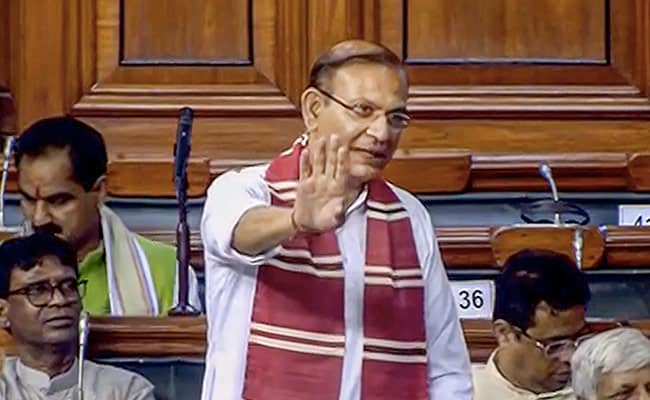 Opposition Looking For “Mehengai”, But It Is Not There: BJP MP Jayant Sinha