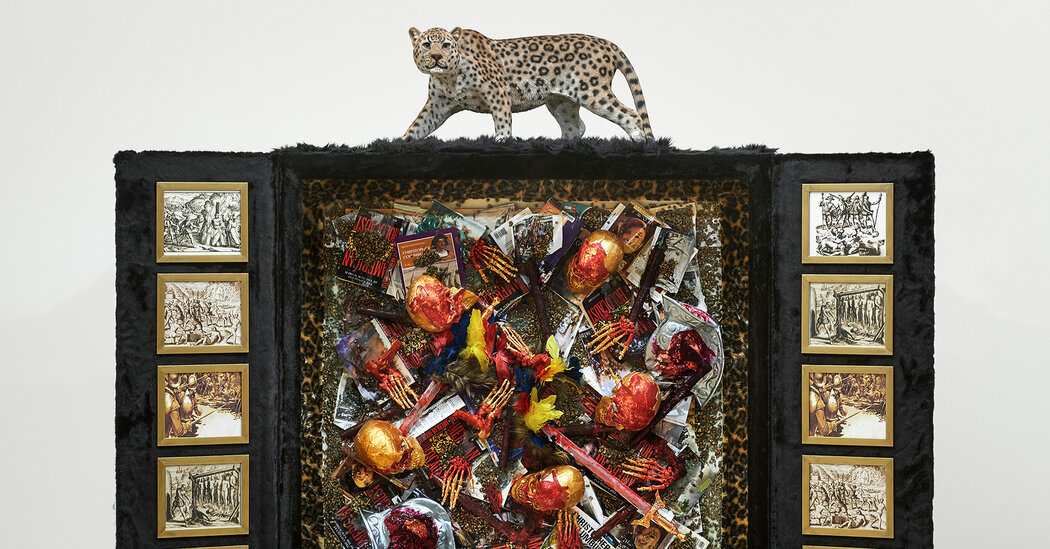 
El Museo del Barrio has had its own internal struggles, concerning whether to focus on its Nuyorican roots or represent the Latin American diaspora more broadly. But “Raphael Montañez Ortiz: A Contextual Retrospective” proves that at its best it can do both. The ambitious exhibition turns the spotlight on the museum’s founder, who continues to make radical and compelling work at the age of 88. With this show, Montañez Ortiz’s legacy should be cemented both for his art as well as for the museum he started.

As I walked through the exhibition, I thought of recent protests: the environmentalists in London gluing themselves to artworks over the continued extraction of fossil fuels, or last year’s 10-week-long campaign, “Strike MoMA,” that claimed to link the activities of board members there to war, the prison system, environmental degradation, patriarchal violence and more.

El Museo’s exhibition is partly a timely response to this ongoing tumult in the world of art museums. But it’s also a reminder that all this isn’t exactly new. In the vitrine before me was a photo taken by Jan van Raay on May 2, 1970, documenting a protest outside the Museum of Modern Art. The signs emerging from the crowd read: “Black & Puerto Rican Art Must Be Here” and “Racist Museum.”

Another, a May 6, 1970, news clipping from The New York Post, features a photo of an alarmed mother pushing a bassinet away from a tangle of New York University students, some of whom appear to be covered in blood. The headline, “On the Campus: No Let-Up At All,” reveals the scene to be a guerrilla theater re-enactment of the Kent State massacre, days earlier when four unarmed students protesting against the Vietnam War were shot and killed by the Ohio National Guard.

Montañez Ortiz instigated that action and, with Joan MacIntosh and Richard Schechner of the Performance Group (the precursor of the Wooster Group), recruited the student collaborators. Next to the news clipping was Montañez Ortiz’s typed instructions from his “Survival Manual for Blood and Flesh Guerrilla Theater” (1968), detailing how to procure animal blood from butcher shops.

As the subtitle indicates, this is “A Contextual Retrospective” that sets Montañez Ortiz, a sculptor, performance artist, and film and video artist, within history, among peers — both lesser-known and boldface names as varied as Gordon Matta-Clark, Ana Mendieta, Faith Ringgold and Hermann Nitsch — and in his role as El Museo del Barrio’s founder. The museum-wide exhibition on this underrecognized artist, who has taught art at Rutgers for more than 50 years, is divided into four sections: “Destruction,” “Decolonization and Guerrilla Tactics” (which includes the photo, clipping and manual), “Ethnoaesthetics” and “Physio-Psycho-Alchemy.”

The spectacle of destruction dominates the Brooklyn-born artist’s early period. For the short experimental film “Golf,” from 1957-58, he punched holes into a source film on the title subject, corrupting the sound and flooding the frame with white circles, as if the film is under attack from golf balls.

Using a tomahawk, he randomly cut up a western film and then mixed the fragments in a medicine bag before stitching the film back together, creating a shamanistic remix, with pieces projected upside-down and backward, laying chaotically bare the mix of sentimentality and violence that constitutes the genre.

The destruction continues in a room full of what the artist calls his “archaeological finds”: burned or destroyed mattresses, sofas and chairs turned into wall-mounted sculptures. Dating from 1961 to 1965, they were made about the same time John Chamberlain was making his colorful destroyed car sculptures (and years before Chamberlain began carving functional sofas out of blocks of foam with a knife). On the wall, in their brown and ashen hues, they anticipate the sculptural installations of found objects by Nari Ward.

Montañez Ortiz’s process of unmaking often emphasizes performance over a completed (or destroyed) object. The best performance documentation in the exhibition is a video recording of his “Piano Destruction Concert: Humpty Dumpty Had a Great Fall,” recorded live at the Whitney Museum of American Art in 1996. He’s accompanied by his wife, Monique Ortiz-Arndt, in a peasant dress operatically singing the part of Humpty Dumpty atop a ladder. Montañez Ortiz provides the lead musical accompaniment as he takes an ax to a piano, in one moment scraping its blade across exposed interior strings and in the next rhythmically chopping at the piano’s structure, creating a performance both dramatic and surprisingly musical. By dissecting a piano in the space of a museum of American art, Montañez Ortiz seems to be hacking away the stuffy, codified ideals of Western high culture.

Not all is destruction. The exhibition curators, Rodrigo Moura and Julieta González, chose to show Montañez Ortiz’s work alongside a motley range of other artists’, creating accruals and dialogues that magnify the importance of any single object. Take for example two bright feather-covered pyramid sculptures, “Maya Zemi I” and “Maya Zemi II” (both 1975), which rest on a tablelike plinth, surrounded by an eclectic but energizing mix of works by other artists.

A zemi is a sculpture containing a spirit, in the tradition of the Taínos, the Indigenous people of Puerto Rico. A vitrine of pre-Columbian Taíno artifacts, all different forms of axes, rest nearby. But so does a marvelous triptych, “Bird Transformation” (1972), of photographs by the Cuban-born American artist Ana Mendieta; she has covered her body in white feathers and is bathed in moody lighting. Across the room plays a slide show, “Unsettled Objects” (1968-69) by the German artist Lothar Baumgarten, consisting of 80 images from the Pitt Rivers Museum in Oxford, England. The slides are overprinted with the artists’ own texts, which critique the colonizing role of anthropologists and archaeologists. Notably, that museum no longer displays human remains, like its famed Shuar shrunken head (tsantsa) collection.

The standout work in the show, “The Memorial to the Sadistic Holocaust Destruction of Millions of Our Ancient Arawak-Taino-Latinx Ancestors …” (2019-20), is also one of the artist’s most recent. Like a scaled-up Joseph Cornell box, the assemblage transmogrifies thrift-store finds into a serious work of art: It recalls a medieval Christian altarpiece. In the central scene, where one might find the figure of Christ on the cross, there is instead an assemblage of skulls, skeleton hands and swords all splattered with blood. (A closer look reveals these materials to be toys or perhaps Halloween decorations.) A stuffed cheetah stalks across the top of the central frame, and the wings of the altarpiece on either side are inset with reproductions from early printed books illustrating scenes of Spaniards torturing the native population they encountered. (A late-17th-century edition of Bartolomé de Las Casas’s “An Account of the First Voyages and Discoveries Made by the Spaniards in America,” a source for some of these images, is under glass nearby.)

There are a few clunkier works here that detract from the whole, particularly digital prints on vinyl from the late 1990s and early aughts. “Witch Hunt” (2007) looks more like a student poster reporting on the history of witch trials in the colonial United States rather than a work of art. But the hypnotically glitchy video works in this final room are worth catching.

As I left the museum, I thought about how both recent and past protests of museums are also proclamations of faith in their power, that their cultural role is worth contesting. The activists at MoMA or the Whitney may be demanding to “Decolonize this Place,” but Raphael Montañez Ortiz, despite his focus on destruction, has helped build for more than half a century a decolonized space. It isn’t perfect, but, in his retrospective, El Museo del Barrio rivals those museums with art that is formidable and challenging while still preserving space for beauty and wonder. 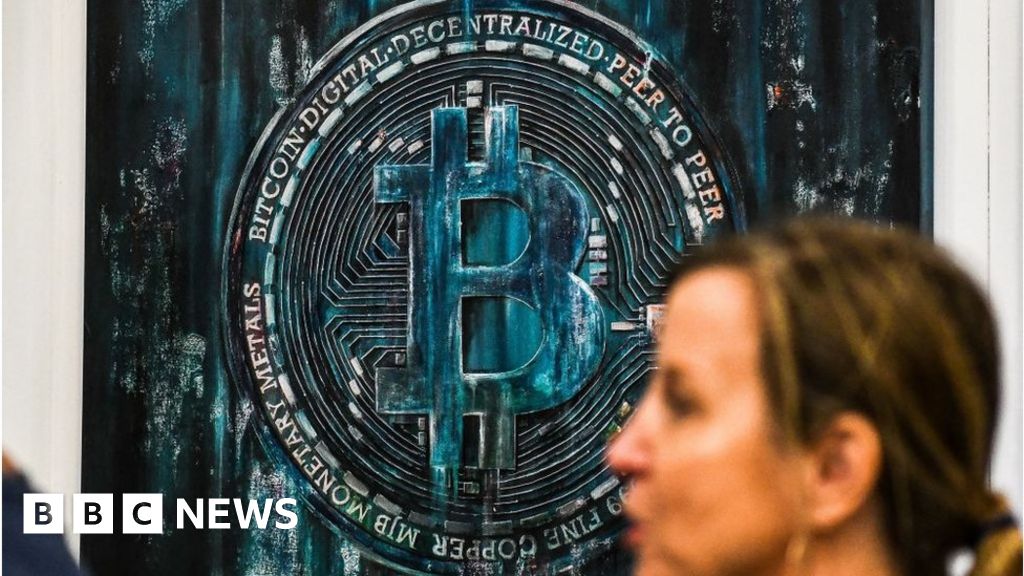 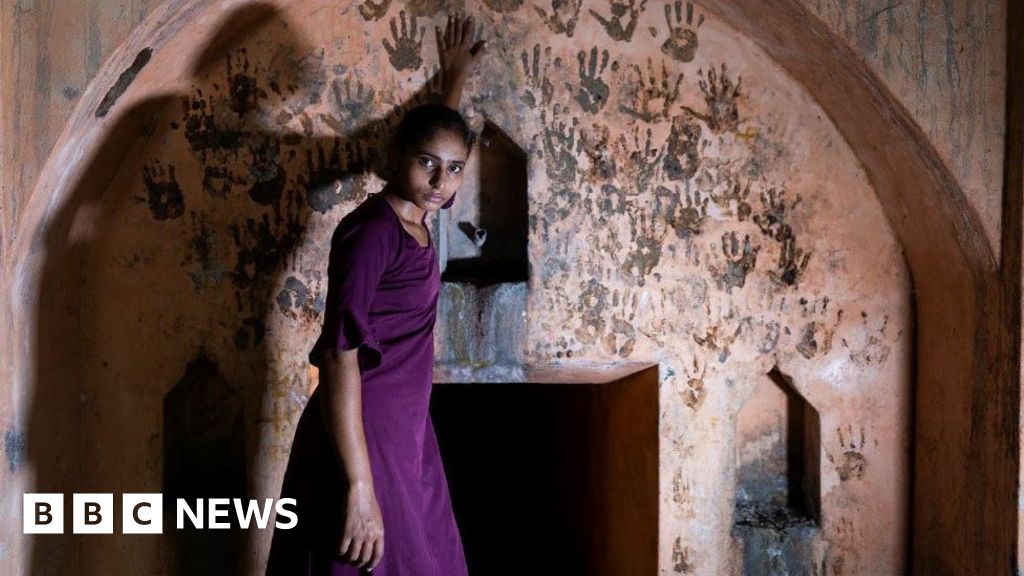 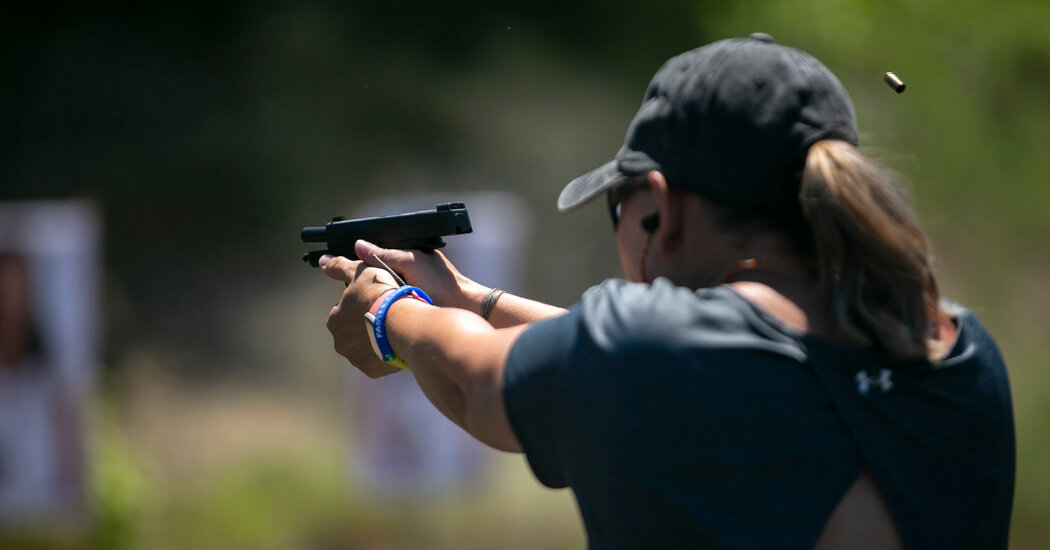