Hyderabad city has received another feather in its cap by being chosen as one among the ‘Tree Cities of the World’ by the Arbor Day Foundation jointly with the Food and Agriculture Organisation of the United Nations Organisation.

Hyderabad is the only city in the country to have been selected for this recognition in response to its commitment to growing and maintaining urban forestry, a statement from GHMC informed on Thursday.

The recognition stands Hyderabad alongside 120 cities from 23 countries, including developed nations such as USA, UK, Canada, Australia and others.

Municipal Administration and Urban Development Department had applied for this recognition based on an online submission on January 31 this year, citing the State government’s Haritha Haram programme and its initiative for the Urban Forest Parks, the statement informed.

The city was evaluated based on the five standards, which have been spelt out by the Foundation as ‘Establish Responsibility’, ‘Set the Rules’, ‘Know What You Have’, ‘Allocate the Resources’, and ‘Celebrate the Achievements’.

Accordingly, the city has to have a written statement by city leaders delegating responsibility for the care of trees within municipal boundary to a staff member, a city department, or a group of citizens called a Tree Board. There should be a law or an official policy that governs the management of forests and trees. These rules describe how work must be performed, where and when they should be applied and penalties for non-compliance.

The city should have an updated inventory or assessment of the local tree resource so that an effective long-term plan for planting care and removal of the city trees can be established. Dedicated annual budget for the routine implementation of the tree management plan, and annual celebration of trees to raise awareness among residents and to acknowledge citizens and staff members who carry out the city tree programme are the other two criteria for the recognition.

“Hyderabad City is demonstrating leadership in management of its urban trees and is serving as part of the solution to many of the global issues we face today. This recognition is a testament to its sustained and institutional efforts to plant, nurture, and celebrate trees, development of urban and peri-urban forestry actions, projects, and strategic planning and commitment to building a healthy city now and for the future,” the statement read.

Congratulating the city on its world recognition, president of the Arbor Day Foundation Dan Lambe said the city is part of an important global network leading the way in urban and community forestry. The city will be further recognised in a global press release on or around March 1, Mr. Lambe assured.

Minister for MA & UD K. T. Rama Rao expressed happiness over the development, and said, through his official Twitter account, that it was an acknowledgement of efforts to improve green cover as part of the Haritha Haram programme. 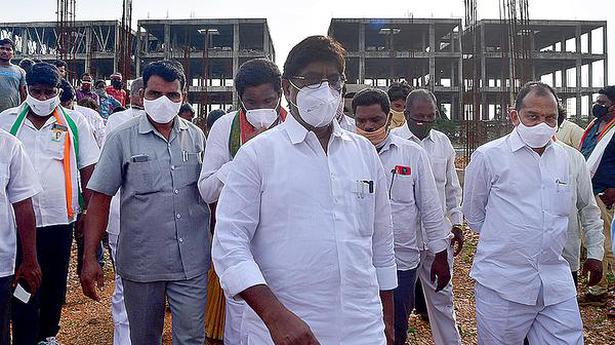 2BHK only an electoral issue for TRS: Bhatti