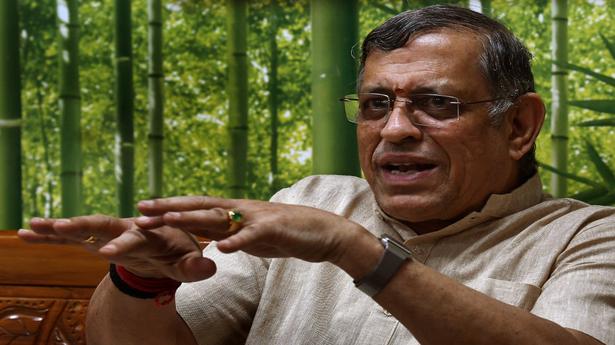 The actor’s plunge into politics will affect all parties, including BJP, says Thuglaq editor Gurumurthy

S. Gurumurthy, the 71-year-old political commentator and editor of Tamil magazine, Thuglaq, is emphatic in his assertion  that though Rajinikanth and the AIADMK founder M.G.Ramachandran are not alike, the impact of their entry into politics could be similar. Here he talks of several issues that of significance in the run up to the Assembly elections in 2021.

After Rajinikanth’s decision to set up a party in January, you, as a long-standing political commentator and his friend, went on record, stating that the move has the potential to transform Tamil Nadu’s political landscape.  Can you elaborate?

There is a historical context to my statement. Tamil Nadu was the first State to challenge ideologically the Congress through the Dravidian movement.   When the DMK [Dravida Munnetra Kahagam] won in 1967, it did not mean the victory of just a political party.  It was the victory of an ideology which rejected much of what the Congress stood for – national integration and such other matters. After M. G. Ramachandran formed the AIADMK [All India Anna Dravida Munnetra Kazhagam  in October 1972] on his expulsion from the DMK, everybody thought, at the time of the DIndigul by-election in 1973, that the DMK vote being divided, the Congress (O), led by K. Kamaraj, would emerge victorious. But, MGR’s AIADMK won with the Congress finishing the second and the DMK, the third. In terms of vote share, it bagged around 52% of votes, reducing the DMK’s vote share by nearly 30% as the latter got about 59% in the 1971 general election. The AIADMK also obtained 12% of votes from the Congress (O).

After Kamaraj’s death [in October 1975], no one could probably defeat the DMK and this was why more and more national minded votes began going to the AIADMK.  At present, own votes of the AIADMK and the DMK, which are impregnable, are in the range of 18% to 20%. The rest of the votes they got is not their own.  So, their [AIADMK and DMK] base is not as large as the votes they get. This is the historical background. Neither the DMK nor the AIADMK will be able to maintain mutually antipathic votes, if an option is available, just as MGR did in 1973. A similar situation is likely to develop now, which is more possible than ever before, because there is fatigue with both the parties. It cannot be denied that there is a social, political and cultural fatigue with both the parties. This is even more so because two towering leaders [M. Karunanidhi and Jayalalithaa] who could have arrested the trend, are not there. Tamil Nadu politics, despite ideological issues, is personality centric. Now, these parties are made to depend upon their own equity. I feel that the absence of towering personalities, which had rendered the battle somewhat abstract and confusing, has been disturbed by Rajinikanth. He is not just seen as a cinema star but also as a good person, a clean man and wanting to do something good for Tamil Nadu, Importantly, he is a nationalist. He will not allow separatism of any kind.  He has also a spiritual bent of mind, which can be equated with the soft Hindu mind of the undivided Congress of 1950s and 1960s.

Also read: Many of the BJP people are associated with Rajinikanth now, says Congress

The situation now is that three important changes have taken place – fatigue with both the parties, absence of towering leaders and the presence of a force, led by a towering leader, who can cause the same disturbance as caused by MGR in 1973. That is why I have said it will mean a huge change.

Do you think that Rajinikanth can be compared wholly with MGR, who had, began using his film career, since his early days, as a propaganda tool for his political agenda, in addition to having the image of being the messiah of the poor and individual dispenser of justice?

MGR clicked in those days because, in the films, he acquired a separate identity, as one who would not drink and smoke and one who would respect women. His film personality itself was a distinguishing feature. That is not there for Rajinikanth. But, Rajinikanth is not seen as a simple cinema star. Second, within films and outside, he has the enormous reputation of being helpful to people. His personal acceptability is very high. Thirdly, he is certainly an alternative to Dravidian exclusivism and separatism. This advantage was not there for MGR.  They [MGR and Rajinikanth] are not the same. They are not even similar. But their impact can be the same.

Will Rajinikanth’s entry lead to realignment of political forces?

The re-alignment would not only be outside DMK and the AIADMK  but also within the DMK and the AIADMK.  For example, if they [DMK leadership] push [the status of] Udhayanidhi Stalin [DMK’s youth wing secretary] to an intolerable level, people who do not like it have an option. The situation, which was prevalent when Edappadi [K. Palaniswami] was declared as the CM candidate [of the AIADMK], does not obtain today.

You have also been saying that there is a huge separation between “atheist politics and religious Tamil Nadu” and Rajini’s idea of “spiritual politics” is aimed at the DMK.   This being the case, would his entry not adversely affect the AIADMK more than the DMK?

In my view, it will affect all the parties including the BJP. My own assessment is that those who would like to join the BJP may also join Rajinikanth’s party. The autonomous growth of the BJP will be stopped by the entry of Rajinikanth because of ideological alignment. So far as the AIADMK is concerned, the impact will even be more. But, don’t think that the impact on the DMK will be less. Only the degree of impact will vary.

Also read: Rajinikanth entry in politics | The politician in waiting

Would Rajinikanth seek to change personality-driven politics, which is one of the important features of TN politics?

It is not possible for Rajini to do it. It will require a lot of political equation.  If you talk of personality-driven elections, it is there everywhere. Take [former Chief Minister of Andhra Pradesh] N. Chandrababu Naidu. Initially, his style was not  personality-driven politics but he turned it that way. If the capacity and leadership is in the hands of the same person, the personality will be the basis. In his [Rajinikanth] case, he is the initiator. It is bound to be personality-based politics.

Do you visualise any tie up between Rajinikanth and the BJP, pre-poll or post poll? If there is no understanding between the two before the Assembly election, what are the options for him?

It is very difficult to say now who will align with whom till Rajnikanth’s impact on individual parties works itself out. How much he is able to disturb the existing parties will decide what will be the realignment and whether the BJP will figure in the realignment itself will be known only by the extent of the disturbance caused.

Would the proposed party of Rajinikanth mark a departure from the trend, as shown by empirical poll data, that there existed no space for a credible third front?

Past experiences and the emergence of Rajinikanth are not comparable. There is no connect between any party and Tamil society but the connect is being sustained through negative voting. This is why people had to defeat one or the other, election to election. Otherwise, an organically-growing polity would have thrown up an alternative.