The Assembly on Friday passed eight Bills that were tabled during the first sitting of the ongoing session.

Following the announcement made by Chief Minister Edappadi K. Palaniswami in the Assembly on September 16 last year, Law Minister C.Ve. Shanmugam introduced a Bill that sought to amend certain provisions of the Indian Penal Code to enhance the punishment for crimes against women and children, especially those registered under sections 304-B, 354-B, 354-D, 372 and 373 of the IPC.

The legislation was also for increasing the maximum punishment for stalking (Section 354-D) to seven years’ imprisonment in case of a second or subsequent conviction, which is at five years, presently.

The Bill also sought to increase the punishment for offences under sections 372 (Selling minor for purposes of prostitution, etc.) and 373 (Buying minor for purposes of prostitution, etc.) to seven years’ imprisonment, with life sentence as the maximum punishment. Currently, the maximum punishment for crimes under sections 372 and 373 is up to 10 years’ imprisonment.

Another Bill introduced by Minister for Higher Education and Agriculture K.P. Anbalagan sought to amend the Annamalai University Act, 2013, and the Tamil Nadu Dr. M.G.R. Medical University Chennai Act, 1987, to effect the handing over of three medical institutions to the Health and Family Welfare Department, so as to treat them as government institutions.

The institutions are: Rajah Muthiah Medical College and Hospital, Rajah Muthiah Dental College and Hospital and Rani Meyyammai College of Nursing, which was attached to Annamalai University in Chidambaram. The Bill is in line with the announcement made by Deputy Chief Minister O. Panneerselvam in his Budget speech. A government order to this effect was also issued on January 27.

Minister for Commercial Taxes K.C. Veeramani tabled a Bill to amend the Tamil Nadu Goods and Services Tax Act, 2017, in light of repealing the provision of the Tamil Nadu Sugar Factories Control Act, 1949, under Section 14, relating to the levy of cess on sugarcane. All Bills tabled during the first sitting of the ongoing session were passed in the House on Friday. Later, Assembly Speaker P. Dhanapal adjourned the House sine die. 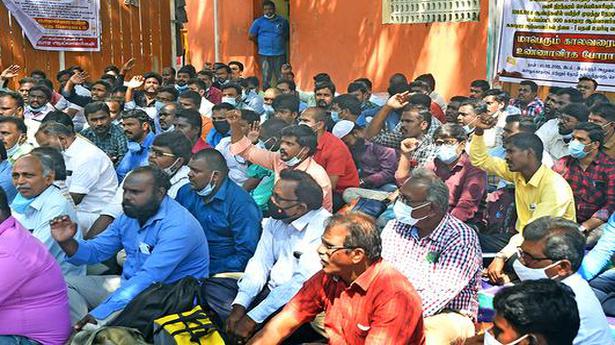