With winter having arrived, my morning tea has shifted outdoors to my balcony where a garmalo-gulmahor (entwined to reach such a great height) and an aging asopalav provide me with some entertaining company by hosting couple of sunbirds, bulbuls, babblers, doves and even a tailorbird.

While birds do liven things up, the real controller of the fate of my tea is a group of ladies who clean my street.

My tea drinking is interrupted everyday by the rasping sound emitted by the metal wheels of the small trolly they drag alongside. Once I hear that sound, I recognize that my time is up and hurriedly drink my tea. If I don’t move out of the balcony in time, the smoke from burning leaves hit my nose first and then my throat.

As they have neither yielded to the law nor to my polite sermons about climate change till date, I have now recognized the sound of metal wheels screeching in search of alignment of ball-bearings as a warning bell to save my lungs from the assault.

But, every time I listen to the sound of that tortured trolly, my heart also goes out for these poor women who laboriously drag it every day for kilometers.

The women and their ill-designed wreck of a trolly reminds me of the story of India Mark II water pump.

As you are reading this irrelevant blogpost in English, there is a very small possibility that you could have even heard about India Mark II, but if you are one of the (almost one billion) rural Indians, it is a life-changing innovation designed by (not an Indian but) a Swedish engineer Oscar Carlsson in 1970s.

It was one of the earliest water pumps designed for the rural India that understood the design challenges of a water pump that has to serve a large community with very little money for maintenance. It was so successful that, even today, with better designed pumps now available, Mark II remains the most installed water pump in third world nations of Asia and Africa.

Even though Mark II changed lives of a billion people, I am perfectly confident to bet that even if you are a qualified designed, chances of you knowing more about Mark II vis-a-vis Gucci or Rolex are extremely small.

From Mark II to the wobbly trolly pushed around by my daily tormentors, the story remains the same.

Who will design for the billions of poor?

There is little doubt that across India our billion poor and poorest brothers and sisters have many problems that the designers can solve.

Just like Mark II, some of those solutions can have profound effects on lives of these people, but there is also very little doubt that French design houses will have their this year’s Winter collections getting designed by more designers than those who are working on the design problems of the poor.

The absurdity of this is striking but easiest to understand.

It is all about where is the money. The poor are not a viable market for designers to engage with their needs.

So, who can make the designing for the poor possible?

Is it that they need to grow and become a market (like self-earning women became for completely useless beauty products) attractive enough to designers as it should happen in a free market economy? Or the state must force designers to work for the poor?

My own feeling is that the onus is not on either, the poor or the state.

It is on the design schools to expose designers to the problems of the poor, and again this learning comes for the Mark II.

While the problem was uniquely third world, Oscar Carlsson the designer who solved it came from one the richest nations on Earth. He ended up with Sholapur Well Service via an NGO and learnt about the water problems of rural India through first-hand experience. He probably did what he did because every designer gets excited when he/she sees a solvable problem and not because there was more money to be made.

If Indian design schools (now mushrooming across India thanks to the lawless and unregulated nature of this educational domain) realise that exposing young designers to problems work like magic, and India too has enough urban mass of reasonably rich kids that can rise above the monetary attraction and design for the poor. 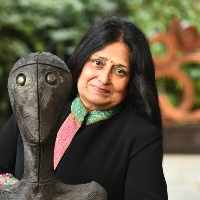 Three artists and the sun

Vexing IPL scenes: All from the comfort of their home, these folks gyrate madly

Calcutta conundrum: Might a popular eatery I once went to have been a source of the coronavirus pandemic?