“We have long witnessed unfortunate attempts to employ force to change status quo along our unresolved border and India is vigilant and prepared to counter and defeat any misadventure to defend our people and territorial integrity at all costs,” Defence Minister Rajnath Singh said on Wednesday at the inaugural event of the 13th edition of Aero India.

At the biennial air show, the Hindustan Aeronautics Limited (HAL) was awarded the contract to manufacture 83 Light Combat Aircraft (LCA) Tejas for the Indian Air Force (IAF) at an estimated cost of ₹48,000 crore.

“Our resolve towards this is shown by our growing defence capabilities…We plan to spend $130 bn on military modernisation in the next 7-8 year,” Mr. Singh said while making a pitch to global defence companies to set up manufacturing

India faced threats and challenges emanating from multiple fronts and India was a victim of state-sponsored terrorism which was now a global threat, he stated.

Mr. Singh will be holding an Indian Ocean Region (IOR) Defence Ministers conclave during the show which has been restricted to three business days due to COVID-19 restrictions. “India has a vast coastline, but our interests also lie beyond our shores. It includes our people who reside and work across continents, especially in IOR. It is our bound duty to remain capable and willing to assist them in times of calamities and security challenges,” he said.

On the LCA contract, Mr. Singh said, “This contract is the biggest Make in India defence contract till date.” The contract includes 73 LCA Tejas Mk-1A fighter aircraft and 10 LCA Tejas Mk-1 trainer aircraft at a cost of ₹45,696 crore along with design and development of infrastructure sanctions worth ₹1,202 crore.

The Mk-1A has significant capability additions over the current variants. It will have over 40 modifications over the Mk1 variant, including major ones like Electronic Warfare System, Advanced Electronically Scanned Array (AESA) radar, Beyond Visual Range (BVR) missiles and network warfare system, including Software Defined Radio (SDR). The modifications will be incorporated on the LCA concurrently along with the production.

For the Mk-1A, HAL has outsourced significant work share to the private industry while it acts as a ‘system of systems integrator’. The HAL has over 550 vendors for the LCA which includes five companies manufacturing the structures.

A highlight was a U.S. Air Force B-1B long range supersonic heavy bomber which flew over Yelahanka air base along with one LCA. A U.S. Embassy statement said that this was the first time a U.S. bomber aircraft had touched down in India.

In a first, the Surya Kiran aerobatic team and the Sarang helicopter display team of the IAF put up a combined performance. 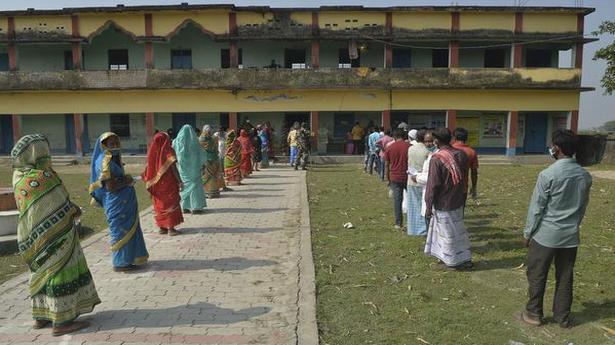 Top news of the day: Bihar Assembly polls conclude; no result yet in U.S. Presidential polls, and more