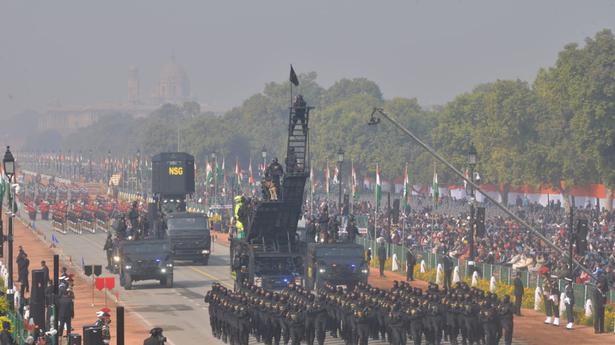 This year, the attendance to the Republic Day parade was limited due to the COVID-19 pandemic.

In a display of India’s military might, Rafale fighter jets took part in the Republic Day flypast for the first time as the armed forces showcased its T-90 tanks, the Samvijay electronic warfare system and Sukhoi-30 MKI fighter jets on the Rajpath on Tuesday.

School children performed folk arts and crafts displaying skills and dexterity handed down from generations. Bajasal, a folk dance from Kalahandi in Odisha, the Fit India Movement and Aatmanirbhar Bharat were also displayed on the Rajpath.

This year, the attendance to the Republic Day parade was limited due to the COVID-19 pandemic. Those below 15 years of age and above 65 were not allowed among the visitors at the venue.

The parade also witnessed several major changes. The contingents only marched a distance of 3.5 km instead of the usual 8.5 km and for the first time in 55 years, no foreign dignitary attended the January 26 parade.

However, a 122-member contingent of the Bangladesh armed forces marched on Rajpath. They carried the legacy of legendary muktijoddhas of Bangladesh, who fought against “oppression and mass atrocities” and liberated the country in 1971.

India is currently celebrating the Swarnim Vijay Varsh — the Golden Jubilee year — commemorating the country’s victory over Pakistan in the 1971 war that led to the creation of Bangladesh.

The Navy’s tableau at the Republic Day parade this year displayed models of Indian naval ship (INS) Vikrant and naval operations that were conducted during the 1971 India-Pakistan war.

A total of 38 IAF aircraft, include Rafale, and four planes of the Indian Army participated in the flypast.

The Defence Research and Development Organisation (DRDO) presented two tableaus at this year’s parade, one showcasing light combat aircraft Tejas’ successful take off from aircraft carrier INS Vikramaditya in 2020, and another displaying full complement of the anti-tank guided missile systems.

The tricolour was unfurled followed by the national anthem with a booming 21-gun salute. The parade commenced with President Ram Nath Kovind taking the salute.

The tableaux highlighted the vision for Ladakh to be carbon neutral, the Sun temple at Modhera in Mehsana District of Gujarat, tea-tribes of Assam, shore temple and other monuments of Pallava Dynasty in Tamil Nadu, Bhakti Movement and saints of Maharashtra, among others. Kushboo held ahead of protest against Thirumavalavan