WASHINGTON: Indian-American Dr Raj Iyer has taken over as the first Chief Information Officer of the US Army, after the Pentagon created the position in July 2020.
One of the highest ranking Indian-American civilians in the US Department of Defense, Iyer, who holds a Ph.D. in Electrical Engineering, serves as the principal advisor to the Secretary of the Army and directs representation of the secretary in matters relating to information management/information technology (IT), the Pentagon said in a statement.
Equivalent in rank to a three-star General, Iyer will supervise an annual budget of $16 billion for the US Army’s IT operations. Over 15,000 civilians and military personnel posted across 100 countries work under him.
Iyer will direct the execution of policies and programmes to modernise the US Army to achieve digital overmatch against near peer adversaries such as China and Russia.
The Army has committed to leveraging advanced technologies such as cloud computing, robotics and artificial intelligence as critical enablers for future war fighting through a concept called multi-domain operations.
Previously, Iyer was partner and managing director at Deloitte Consulting LLP, where he led multiple technology programs supporting government clients.
Over the course of his 26-year career, Iyer has supported a range of defence and commercial clients on a number of complex enterprise transformation challenges, including strategy, innovation and modernisation.
He has established new organisations, including the first office of the Chief Technology Officer in the Army, co-founded a successful technology start-up, and led recovery programmes such as Obamacare. He also holds a patent and has published dozens of peer reviewed papers.
Iyer holds a Ph.D. from the University of Texas at Arlington along with multiple masters degrees, including a Master of Business Administration from the University of Michigan at Ann Arbor and a Master of Science in Electrical Engineering from The University of Texas at Arlington.
Iyer, originally a native of Tiruchirappalli in Tamil Nadu, grew up in Bengaluru and completed his undergraduate studies at National Institute of Technology Tirchi before moving to the US to pursue higher studies.
In the US, he had barely enough money to pay for tuition and rent for one semester through his father’s life savings, but was soon able to secure a full fellowship to complete all of his graduate education.
His father Manakkal K Ganesan, an engineer working as General Manager at Metallurgical and Engineering Consultants (MECON), was instrumental in showing him a passion for public service and the value of education and hard work, according to a testimonial online.
Iyer is married to Brindha, a healthcare IT programme manager in the US government. They have two sons, Ashwin Iyer, a freshman majoring in Data Science at the University of California at Berkeley, and Abishek Iyer, a 9th grader at Centennial High School in Maryland. 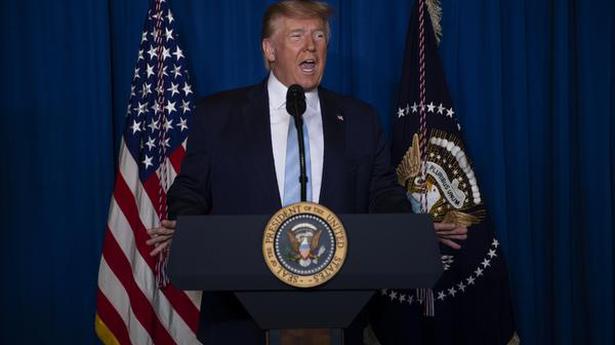 Trump: US demands restoration of UN sanctions against Iran

International team seeking Covid-19 origin to go to China in January: WHO – Times of India