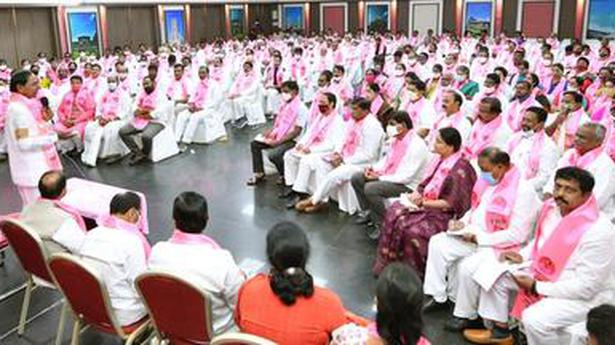 
Chief Minister K. Chandrasekhar Rao on Sunday spewed fire at TRS leaders for raising the talk that he was to step down and pave way for his son and IT Minister K.T. Rama Rao to take over the mantle.

Mr. Rao talked tough to Ministers and MLAs at the executive meeting of the party, as he went to the extent of saying that he would not spare anyone of them if they continued to make “mindless” comments. They would be suspended from the party. He said he would remain Chief Minister for 10 more years as he was completely fit.

Seeking to know why they indulged in such loose talk, Mr. Rao asked them to check their utterances as it was harmful otherwise. He promised to take them into confidence if at all he wanted to quit State politics and enter the national arena. He was more interested in serving the State and the party. It was not as easy to lead a party as “singing a song” or “running a pan shop”.

Sources said Mr. Rao used strong words expressing his resentment at the leaders suggesting that the change of guard was imminent. “Do you want me to quit?”, he asked. He later summoned Ministers Eatala Rajender, E. Dayakar Rao and T. Srinivas Yadav and Deputy Speaker T. Padma Rao to his chambers in TRS office after the meeting to pull them up for airing their views.

Mr. Rao informed the executive that he wanted to withdraw from politics like Mahatma Gandhi after Telangana got Statehood, but was compelled to take the seat of Chief Minister due to apprehensions that the State might go into disarray if he was not at the helm. He was never interested in being targeted by all and sundry.

On organisational matters, he announced the launch of TRS membership drive with a target of 50,000 members per Assembly constituency from February 12. The constitution of party committees from village to State level will commence from March 1. District in-charges of party will be appointed for the purpose. Expressing dismay at the highhandedness of TRS MLAs in some districts, he asked them to give a dignified place to party leaders at lower levels as they were all part of the team. The victory of MLAs in the next elections was dependent on the contribution of second and lower rung leaders.

He assured tickets to sitting MLAs in the next elections unless they fared badly and failed to mend their behaviour. If it came to picking up alternative candidates, he would consult leaders in constituencies before changing MLAs.

Mr. Rao said he would allot quotas to MLAs to sanction double bedroom houses. The government proposed sanction of ₹ 10,000 crore for the development of SCs and STs. He would tour districts to hand over pattas for podu lands.

State gears up to host 80 diplomats on Dec. 9 No pending instalments of MPLADS scheme