16,657 beneficiaries from Revenue, Police departments, pourakarmikas and others identified for immunisation in second phase

After the healthcare workers, it’s now the turn of frontline workers to get the jab against COVID-19 with the launch of the second phase of vaccination on Monday.

Though not all the registered healthcare workers of the district took the vaccine, the authorities in Mysuru hope to cover all the frontline workers identified for the inoculation, with sufficient stocks of Covishield vaccine available for carrying out the task, like the way it was done for the healthcare workers in the first phase complying with the protocols.

The target in Mysuru is to cover 16,657 beneficiaries belonging to the Departments of Revenue and Police, and pourakarmikas from the city corporation and the municipalities.

Unlike the vaccine sessions for the healthcare workers where a maximum of 100 persons a day could be vaccinated, the vaccination centress had been told to administer a maximum of 200 beneficiaries a day in the second phase.

Sources told The Hindu that the vaccinated healthcare workers would be getting their second dose from the third week of this month, based on the date of their immunisation, completing 28 days from the first dose.

“All the healthcare workers should have taken the jab as the vaccine was safe. They have missed the opportunity and we don’t know when will their turn come again if they wish to take the vaccine,” a senior doctor from the Mysore Medical College and Research Institute (MMCRI), who took the vaccine, told The Hindu.

The authorities have expressed hope to cover all 16,000-plus beneficiaries in the next three days, since a maximum of 200 could be vaccinated in each centre daily.

In Kodagu, the vaccination drive for frontline workers will begin from Tuesday since the district administration was occupied in making arrangements following the visit of President Ram Nath Kovind on February 6. As many as 3,152 beneficiaries had been identified for the jab which the authorities hope to complete in three days at 14 vaccination centres across the district.

Govt. plan is to set up one medical college for every three districts: Pralhad Joshi 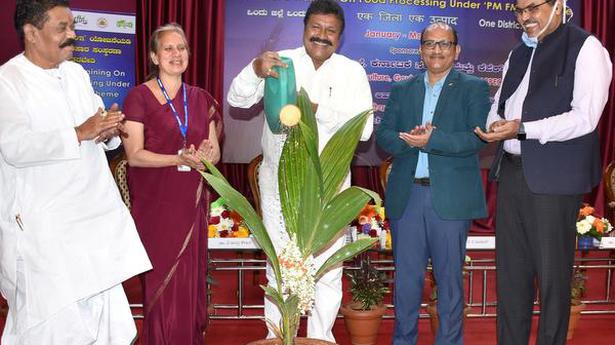 Why do we need Upper House, ask farmers’ leaders