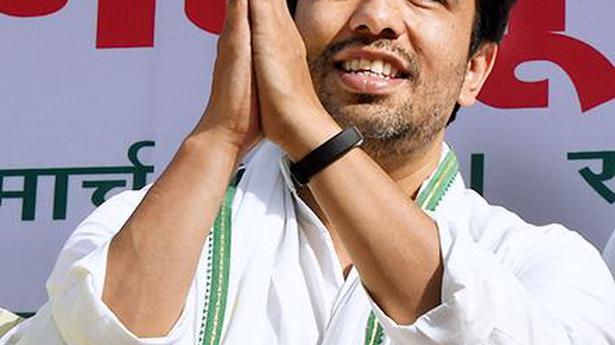 ‘Whenever there is a challenge, people unite and give birth to a new movement’

“This government should not try to enforce its whims as we were born obstinate,” said Rashtriya Lok Dal vice-president Jayant Chaudhary, addressing a massive kisan panchayat against farm laws in Sadabad area of Hathras district on Monday.

He appealed to the farmers to apply “vote ki chot” [cause damage by voting] to teach the BJP a lesson. “After listening to the Prime Minister’s address in Parliament, the farmer is feeling insulted and has become more resolute in his stand against the farm laws,” he said.

A large number of farmers turned up for the panchayat yet again. “The protests have emerged from the grassroots, but strangely Mr. Modi is keeping his eyes shut to their [farmers’] demands,” Mr. Chaudhary said.

“Whenever there is a challenge, people unite and give birth to a new leader, a new movement,” he said.

Mr. Chaudhary reminded how his grandfather Chaudhary Charan Singh had argued in his book — India’s Economic Policy: The Gandhian Blueprint, published in 1978 — that those who were running the country didn’t know the social and psychological make-up of the farmers. “People with urban upbringing make laws for rural India. Even if they have the farmers’ interest in mind, they are not practical. This is proving to be true in 2021,” he said.

“The Prime Minister said in Parliament that one should not insult the capitalists. This in a country where there is still inequality, where a large section of the electorate is still poor. It shows the PM knows everything. The laws are made for the benefit of his capitalist friends,” said the RLD leader.

Raising the issue of a farmer from Aligarh who recently killed himself, Mr. Chaudhary said: “They seek vote in the name of Ram, but they are not concerned about Ramjilal who ended his life after facing humiliation at the hands of officials for his inability to pay electricity bill.”

He recalled that the government had promised to develop 22,000 Gramin Hats (rural marketplaces). “I could not find one in this region that is known for potato cultivation. The Shanta Kumar Committee had said in 2015 that only 6% of farmers could sell their produce at MSP. The goal should have been to increase procurement by increasing the number of government mandis,” he said.

Mr. Chaudhary feared that the government would sell the Food Corporation of India as well as it is running losses. “They are busy selling everything and the farmers will have to suffer,” he said.

He also took the U.P. government to task for not increasing the State Approved Price of sugarcane for the third consecutive year. Onion exports to resume from January 1