The family of the Black man shot by police in Kenosha, Wisconsin, made an emotional plea for the value of their son’s life on Tuesday and called for an end to the violent protests that erupted in the city.

“They shot my son seven times. Seven times! Like he didn’t matter,” Jacob Blake Sr., his voice crumbling with emotion told a news conference following the Sunday shooting of his 29-year-old son. “My son matters. He’s a human being and he matters.”

The news conference was called by the family’s lawyers as state and local officials brace for a third night of unrest following Jacob Blake, Jr’s encounter with police on Sunday in which seven shots were fired at him from point blank range.

Earlier on Tuesday Wisconsin Governor Tony Evers declared a state of emergency and said he would deploy more state National Guard troops to counter looters and arsonists who had caused widespread damage to public buildings and businesses overnight.

The lawyers said Blake was paralyzed from the waist down — possibly permanently — had holes in his stomach, suffered damage to kidney and liver and would need his entire colon and small intestines removed.

Letetra Wideman, sister of Jacob Blake, a Black man who was shot several times in the back by a police officer, speaks during a news conference outside the Kenosha County Courthouse in Kenosha, Wisconsin, U.S. August 25, 2020.
| Photo Credit:
REUTERS

Julia Jackson, Jacob’s mother, made an emotional appeal for unity, saying she was praying for police officers. She also said she was disappointed by the damage to the city.

“It doesn’t reflect my son or my family,” she said. “If Jacob knew that was going on as far as that goes, the violence and the destruction, he would be very unpleased.”

Blake, who had been attempting to break up a fight between two women, was struck by four of the seven shots, all fired by one officer, in front of his three young sons, according to civil rights attorney Ben Crump, who represents the Blake family.

Video captured by a neighbor shows Blake walking toward the driver’s side door of his SUV, away from two officers who were pointing guns at his back. After he opens the door and leans into the car, seven shots ring out, with one of the officers tugging at his shirt. The police have not explained why Blake was shot.

The shooting is under investigation by the Wisconsin Department of Justice, which has not released any details. Kenosha police have referred all questions to the state investigators.

But the incident, the latest in a litany of cases to focus attention on police treatment of African Americans, unleashed outrage in Kenosha, a Lake Michigan city of about 100,000 people located between Chicago and Milwaukee. 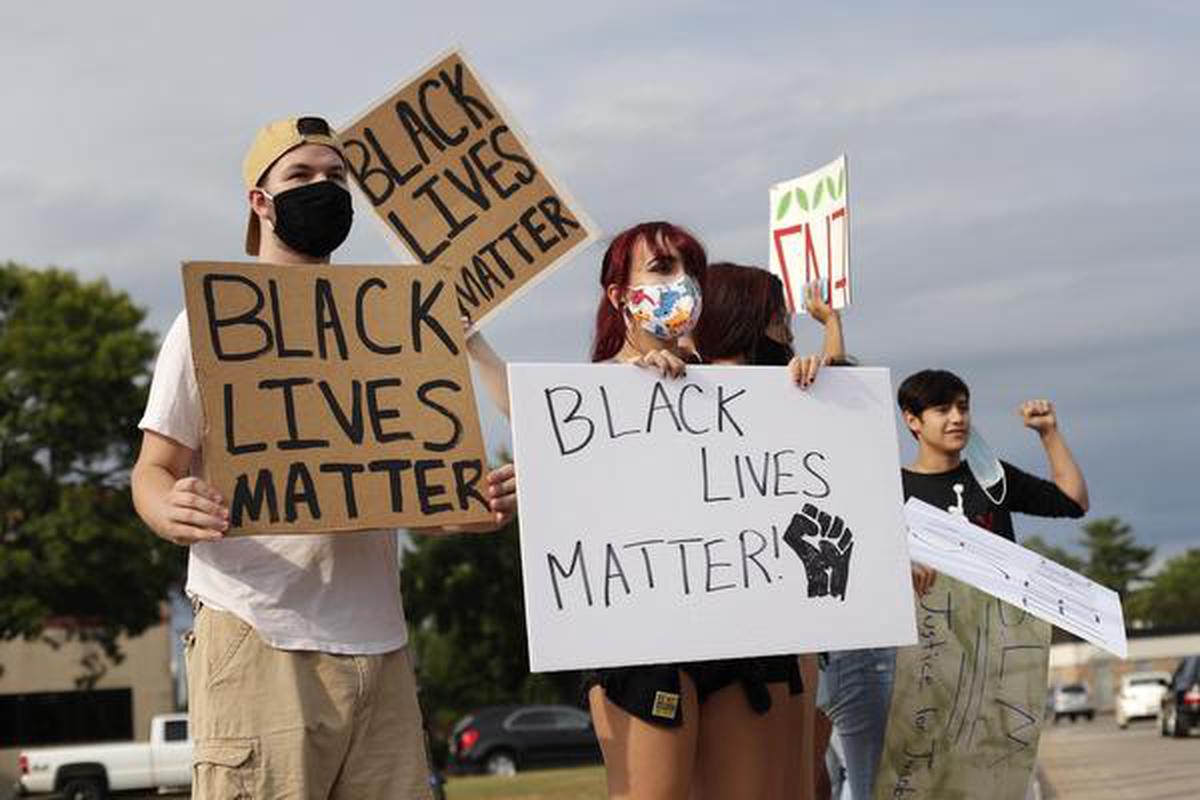 Protests near the south side of the Marathon County Courthouse, Tuesday, Aug. 25, 2020, in Wausau, Wisconsin
| Photo Credit:
AP

Evers said he would authorize an increase in the Wisconsin National Guard’s presence — more than 100 members were deployed on Monday — to 250. The move came as other officials called for a more forceful response after a night of looting and arson overshadowed peaceful protesters on the streets.

In Kenosha a curfew set for 8 p.m. on Monday was largely ignored. As the evening wore on, the mostly peaceful demonstration turned violent, with some people setting off fireworks and others setting fire to buildings.

Bennett said fires had destroyed much of the Black business district and that those she saw igniting fires were white. “It’s people from out of town doing this. We’ve been shopping there since we were kids, and they set it on fire,” Bennett said.

While acknowledging the First Amendment rights of protesters, Governor Evers said lawless behavior would not be allowed.

“There remains a line between peaceful assembly and what we saw last night that put individuals, families, and businesses in danger,” the Democratic governor said in a statement.