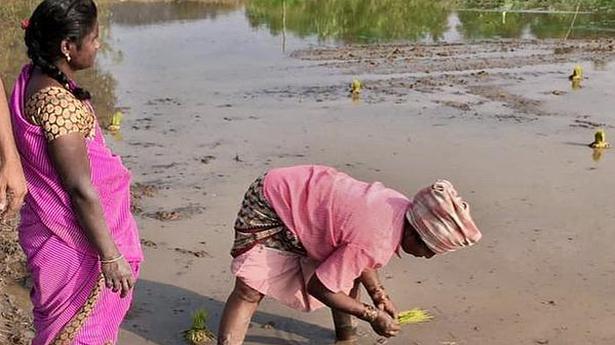 Wet spells in the last two days have given impetus to rabi operations, say officials

The rain that lashed Chittoor district for the last two days have brought cheers to the farmers as it has given impetus to the ongoing farm operations.

According to officials, the district received 2,062 mm of precipitation in the last two days when compared to the monthly average of 516 mm.

“The rains, though untimely, have been very advantageous to the ongoing rabi operations. Thanks to the remarkable recharge of groundwater and storage in several tanks and reservoirs due to the months-long rain, paddy cultivation in Chittoor, considered a rain-shadow district, is all set to get a tremendous boost this rabi season,” Joint Director (Agriculture) N. Vijay Kumar.

With availability of water, the paddy acreage is expected to go up this rabi season.

“Paddy acreage in the district is likely to cross the 60,000-hectare mark when compared to the expected 45,000 hectares. The January rains will add strength to the soil and moisture conditions,” explained Mr. Vijay Kumar.

Ailaiah, a farmer of Vedam village near Srikalahasti, said that he had suffered damage to paddy crops in 2015 and 2016 due to rain in November and December. “But the rain this time will help the crops. I am looking forward to a good cropping season this time after a gap of five years,” said Mr. Ailaiah.

The officials are hopeful that the rain would help groundnut, sugarcane and intercrops.