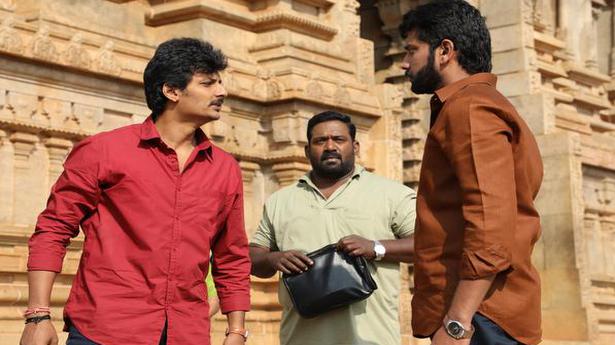 The Jiiva-Arulnithi starrer is a light-hearted movie inspired by the filmmaking styles of Sundar C and Hari, but offers little cinematic value

Why are Tamil filmmakers so committed in their resolve to not explore romance beyond its superficial layers? It is the million dollar question whose answer no producer has ever wanted a script writer to figure. And so, left for us to consume are films like Kalathil Santhippom which even when presented with an opportunity to be something else fail to grasp it.

The film offers a routine story that has been done to death in Tamil cinema; it is a masala film that lives up to its moniker by bringing together plot lines you may have watched in ‘90s era Tamil movies.

The film’s title translates to ‘Let’s meet on the playfield’ and although the protagonists Ashok (Jiiva) and Anand (Arulnithi) are introduced as kabaddi players, the only other time (besides the intro scene) the duo step into an actual playfield is towards the end, and for a cause irrelevant to the base story.

Ashok and Anand are best friends, and like many friends the duo constantly disagree on things, fall out and then learn to bury their differences. Add Robo Shankar and Bala Saravanan into the mix, and there are engaging elements distributed sporadically throughout the screenplay, but it is a mixed bag because Rajasekar also passes off body shaming as humour.

Into the mix comes Kavya (Manjima) who Anand’s parents want him to marry. When Ashok becomes the cause for Anand’s wedding plans to be stalled, he tries to fix the situation for his friend. However, a ghost from Anand’s past walks back into his life to complicate things….

Kalathil Santhippom would surely work for the casual viewer who is not bothered too much about loopholes, missed opportunities or even the incredible elasticity of the average stuntman in Tamil films (one wonders why they are made to bounce off the floor after taking a mere slap from the hero!). It is a film made exactly for such an audience and not for the critic.

However, this here is the gripe: why can’t a commercial filmmaker commit to exploring romance beyond the superficial things we are shown?

Neither the filmmaker nor the male actors (around whom this industry predictably revolves) supposedly believe that the audiences believe a bond between a man and a woman tastes like vanilla ice cream. So, why then are we served with plots and screenplays that lack flavour, if that is what you are looking for in a masala film?

Whilst Kalathil Santhippom is more influenced by the filmmaking styles of Sundar C (the car chase sequence around the village is reminiscent of Kalakalappu) and Hari (action sequences that are all the same), it is surprising to see just how many filmmakers have attempted, but failed to successfully incorporate the Viswasam formula into their masala films.

And Viswasam’s success was in that the screenplay tugs at your emotional nerve and elicits a reaction. These films that aspire to replicate that success fail to do that — making the audience emotional.

You don’t feel charged up for Ashok and Anand’s friendship. In fact, you feel worked up by the superficial presentations afforded to caste, love and other humanly things, and that is painful because on the other hand you see so much care going into making a stuntman bounce off the floor!

So, move over vanilla ice cream, I demand only faloodas going forward. Will Tamil cinema listen? 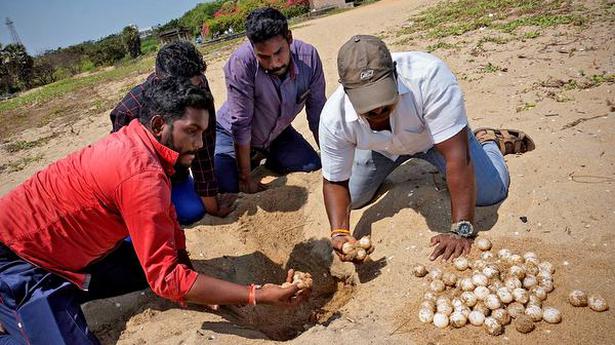 Nesting of Olive Ridleys picks up

CM writes to PM on release of fishermen