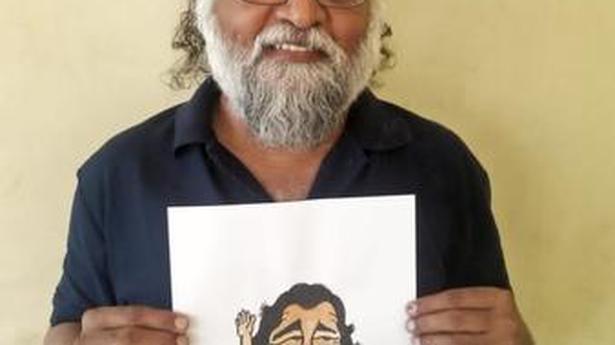 M.V. Jayaraj’s work published in album brought out by Union of World Cartoonists

Drawing caricature is nothing new for M.V. Jayaraj, a resident of Vellur in Kannur. But it turned out to be special when the Union of World Cartoonists (UWC) recognised his caricature of footballer Diego Armando Maradona and included it in an album released recently.

The association, based in Istanbul in Turkey, had invited caricatures from cartoonists across the world to pay homage to the late football wizard in a unique way.

The album titled Portrait Caricature Album – Diego Armando Maradona features over 50 multicoloured caricatures by cartoonists from 24 countries, including India. The caricature by Jayaraj is one among them.

It is an honour to find a place in an album published by the UWC and also a fitting tribute to the greatest footballer. People in Kerala love football and like any other football fan, Maradona has always been close to my heart, he says.

So, when the UWC invited caricatures for the album, I took this as the biggest opportunity to pay tributes to Maradona and immediately came up with the caricature, says Jayaraj.

While drawing a caricature, it is important to capture the character and behaviour, he says adding that there cannot be a better way of paying homage to Maradona.

A freelance cartoonist who contributes to papers and weeklies, he retired as superintendent from the Kerala State Electricity Board. He is a former vice chairman of the Kerala Cartoon Academy and member of the Indian Institute of Cartoonists.

It is his third work that has featured internationally. Earlier, his caricature of Gabriel García Márquez was on display in Egypt. His cartoon on the subject of Freedom came in the February (2021) issue of the International Bir Kitab Bin Dost Cartoon e-Magazine, published in Istanbul.

Rumblings of discontent at Cong. meet over poll debacle