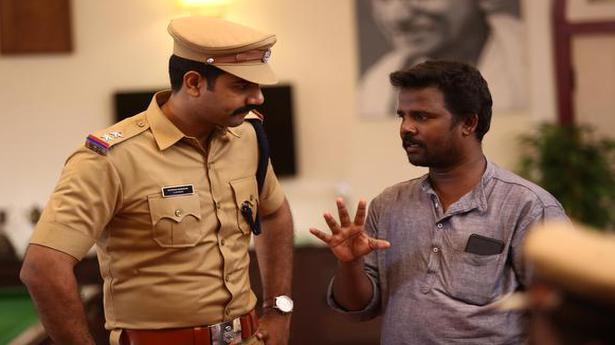 The debutant filmmaker says ‘Karnan Napoleon Bhagat Singh’, which is eyeing for a theatrical release, moves forward through the perspective of a young man gearing up to become a cop

A murder jolts the countryside dwellers out of their ordinary lives in an otherwise peaceful village. Suspicions arise and fingers are pointed. They know the murderer is one among them. Debutant director Sarath G Mohan says his upcoming Malayalam film Karnan Napoleon Bhagat Singh is a family thriller-cum-murder mystery.

“A larceny leads to cracking of a murder. The story moves forward through the perspective of Roopesh Raghavan, a young man who has cleared police recruitment tests and awaits posting. The entire film happens before he officially joins the force,” says Sarath, who has also written the script. Actor Dheeraj Denny (of Kalki, Varikkuzhiyile Kolapathakam fame) plays the young cop.

Sarath says though Karnan Napoleon Bhagat Singh is essentially a whodunit, the focus is more on the ‘why’ than the ‘who’. “The story is set in a village called Manjamankala and we get to see how something like a murder creates such a flutter in a close-knit community,” says the Kollam native.

He adds that perhaps in a countryside, sensational news often spreads faster. “The kind of attention such an incident would generate among people would be more is what I felt. It is not just the bereaved family that is affected but the larger community itself,” he says.

The film’s title is a hat-tip to a popular dialogue by Prithviraj Sukumaran’s character in 7th Day where he says “Karnan Napoleon Bhagat Singh… these three are my heroes”. Sarath says the title is a metaphor in his film. “A local arts and culture club where Roopesh and his friends get together frequently is named Karnan Napoleon Bhagat Singh. In fact, most of the action pivots around this club and its members,” adds Sarath, who scripted the 2016 movie Paulettante Veedu.

Karnan Napoleon Bhagat Singh was mainly shot in locations near Erattupetta in Kottayam district, while the climax sequences were filmed in Fort Kochi. Sarath says the shooting was wrapped in December last year and was planned for release in April, but was indefinitely postponed due to the pandemic. Though the makers briefly considered a direct OTT release, Sarath says they are now waiting for the theatres to re-open in Kerala.