The Karnataka government on Sunday relaxed curbs on public celebration of Ganesha Chaturthi festival and allowed placing one Ganesha idol in one ward in the limits of city corporations, including Bengaluru, and restricted the number of people to 20 at a time.

The government, in its revised guidelines, clearly stated that the height of the idols placed at public places and in houses should not be more than 4 ft and 2 ft, respectively.

Organisers have to obtain permission from local municipal authorities/local authorities for placing idols in public places. Organisers or committee members have to produce COVID-19 negative reports and vaccination certificates.

Deputy commissioners of border districts had been empowered to take decisions on granting permission to public celebrations of the festival depending on the COVID-19 cases. Permission would not be given in places which have more than 2% of positive cases, according to Revenue Minister R. Ashok.

The revised guidelines said organisers had been instructed to hold vaccination camps at places of public celebrations. Placing idols should not cause inconvenience to the public and movement of the people and not give rise to law and order problems.

Idols of Ganesha should be placed on the permitted locations and pandals to be erected on 50×50 sq ft area in city corporation limits, Mr. Ashok said.

The guidelines said all types of cultural and entertainment programmes were strictly prohibited during the festival. Processions had been banned during taking of idols to houses or public places for worship and during immersion. Idols had to be immersed at the designated tanks/ponds/mobile tanks identified by the local authorities.

The Minister said the government had strictly barred placing of idols on the premises of schools and colleges during the festival.

No celebrations would be allowed after 9 p.m. Night curfew has been imposed in the State from 9 p.m. to 5 a.m.

It may be noted that several BJP leaders and legislators and a few organisations had urged the government to allow public celebrations of the festival.

In Andhra Pradesh, the BJP opposed the restrictions imposed by the State government on the celebration of Vinayaka Chavithi at public places.

(With inputs from Kurnool) 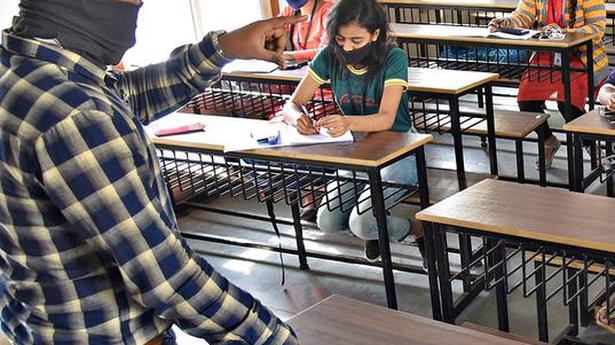