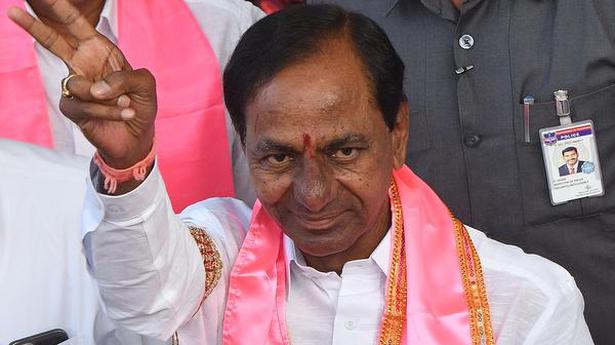 Some MLAs are confused on what line to take while speaking about the BJP particularly with senior leaders not keen to attack the central government.

Amidst rumours that leadership change is likely in Telangana with Municipal Administration Minister, K. T. Rama Rao likely to be elevated, TRS president and the Chief Minister, K. Chandrashekhar Rao has called for the party executive committee meeting on February 7.

Apart from the executive committee members all the Ministers, Parliament members of both Lok Sabha and Rajya Sabha, MLAs, MLCs, Chairpersons of various Corporations, Zilla Parishad chairpersons, Municipal Mayors and DCCB chairpersons have been invited to the meeting.

The meeting is likely to discuss the election of the party president and the preparations for the annual party meeting on April 27.

Some MLAs are likely to express their views on the rumours of TRS working president, K.T. Rama Rao’s elevation at the meeting and seek some clarity on the issue. “We will try to speak to our party the president on Mr. KTR’s rumoured elevation and also support an expeditious decision if Mr. KCR has really decided on it,” an MLA from a North Telangana district said.

Some MLAs are confused on what line to take while speaking about the BJP particularly with senior leaders not keen to attack the central government. What baffles them is the sudden silence of the party on its opposition to the new farm laws.

The Chief Minister who himself a strident critic of the Central government and the BJP policies on farmers has not spoken a word so far against it ever since his visit to New Delhi, feel some MLAs further pushing them into a dilemma.

The recent spiralling success of the BJP in the state, evident in the Dubbaka bypoll and also the GHMC elections is likely to be debated at the meeting with the Chief Minister presenting the outcome of the surveys done to assess the strength of the party at various levels. Making a difference with art