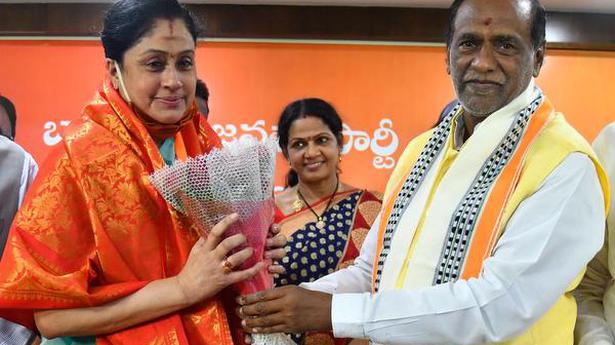 
Film star-politician Vijayashanti, who has returned to the BJP fold, accused Chief Minister K. Chandrasekhar Rao of “cheating Telangana people by amassing lot of wealth and perpetuating family rule despite the trust they had reposed in him by electing him twice to power.”

“He is a better actor than me. What did he do for the State in last six years, except looting and pushing it into debt trap of ₹4 lakh crore? He has come to power due to the sacrifices of martyrs of Telangana agitation. For six years, he has been lying to the people and they are no longer going to accept it. The first blow was delivered in Dubbak byelection, second knock in GHMC and the third blow will be in 2023 Assembly elections,” she said on Thursday.

Addressing a press conference at the party office flanked by senior leaders K. Laxman, Vivek Venkatswamy and others, Ms. Vijayshanti said the BJP is the “right” party for Telangana and it is time people get benefits of a separate State with development works.

“Mr. Rao loves money and power. He is not at all interested in any development. Not a single section of the society benefited in his governance. There is corruption everywhere and all the ill-gotten wealth should be distributed to the people as it belongs to them,” she said.

The BJP leader charged Mr. Rao of having put “handcuffs on farmers” agitating for the right price and not coming to the aid of those who had grown fine rice as demanded by the government. The government has no right to support farmers agitating in Delhi seeking repeal of the farm Acts, she said.

“What has this government done to arrest farmers suicides?,” she questioned.

Time has come for people to throw out the TRS permanently since the BJP has emerged as the alternative with committed leadership and cadre. The countdown has already begun. Recalling her early days in BJP, the film actor said she had to leave the party to keep the separate Telangana agitation alive as it had to bow to the then coalition partner, the Telugu Desam Party.

“I started Talli Telangana Party much before Mr. Rao entered the scene. After being denied ministerial berth in the TDP government, he set up TRS and diabolically forced me to join him using intellectuals, and by putting a lot of pressure. Truth is he could not tolerate another popular leader and wanted only his family to be in the forefront. I endured humiliations like not being allowed to address meetings, but I bore them for sake of Telangana. For no reason I was suspended from TRS though I fought for separate State till the bill was passed in the Parliament,” she said.