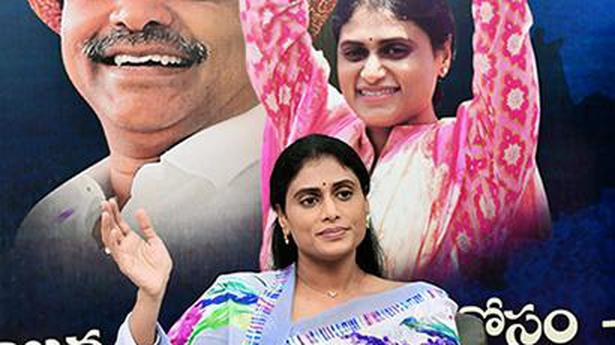 
The separate State of Telangana became a reality because of the constitutional provision for reorganisation of States made by B.R. Ambedkar. Also, without the participation of Dalits in the movement for statehood, Telangana would not have been achieved.

“However, Chief Minister K. Chandrasekhar Rao continues to dislike Dalits. His promise of Dalit CM during the movement and Dalit Bandhu now in the wake of Huzurabad byelection are to woo them, use them and later get rid of them,” YSR Telangana Party founder Y.S. Sharmila said on Sunday.

Addressing ‘Dalit Bheri’ public meeting at Tirumalagiri, in the reserved Thungathurthy Assembly constituency in the district, she said CR’s love for Dalits was fake and his true love was winning elections.

She observed that KCR’s government owed ₹61 lakh to each Dalit household as against the ₹10 lakh direct benefit transfer declared, in the name of Telangana Dalit Bandhu scheme now. She calculated the figure at ₹10 lakh per acre for the promised three acres, average agricultural output per season and the past underutilised budgetary allocations of ₹85, 000 crore.

“He keeps Dalit IAS/IPS officers away, his redesign of B. R. Ambedkar Pranahitha-Chevella project to Kaleswaram Lift Irrigation Scheme, for commissions, also did away ‘B.R. Ambedkar’. How many times did KCR pay tributes to B.R. Ambedkar? Why has the rate of atrocities against Dalits in the State increased several times? Why are Dalit lands grabbed for government offices and other facilities in villages?” she wondered.

Ms. Sharmila also faulted the Opposition parties in the State, the Congress and the BJP, for not questioning KCR about the many failed promises, including making a Dalit Chief Minister.

State well within its limits in managing finances despite COVID-19: Harish

Forest staff told to get vaccinated