Bhartiya Kisan Union National spokesperson Rakesh Tikait on Thursday said Delhi would be kept out of “chakka jam” on February 6.

“I appeal to my farmer brothers to keep it peaceful, distribute sweets among people during the strike and spread awareness on how harmful these laws are to the country,” said Mr. Tikait.

He further appealed to the farmers to refrain from using “unparliamentary language as it is a fight for roti, not votes”. Regarding the tweets made by activist Greta Thunberg, he said it was an ideological battle and those who agree with the farmers have come out in support.

Earlier, he said it seemed that the government wanted the farmer protest to continue. “We are constantly asking the government for talks, but they are paying no heed.”

He also gave a formula for a long protest. “I appeal to every village to send one tractor with 15 people for 10 days. This cycle should continue till our demands are met,” he said.

He also criticised Delhi Police for not allowing the Opposition MPs to reach the protest site. “MPs are the voice of democracy,” he said.

In a related development, the Shamli administration denied permission for a Kisan Panchayat in Bhainswal village on Friday citing Section 144 of the CrPC.

However, the district president of Rashtriya Lok Dal, Yogendra Singh, said they were in talks with the administration and that the panchayat would be held. “We didn’t ask for permission. We just sent a letter to inform them that as our vice-president Jayant Chaudhary would attend the panchayat, adequate security is provided. In reaction, the administration imposed Section 144 of CrPC.”

Mr. Singh said the administration was under an impression that it was a political rally. “We clarified it is a farmers’ rally, which we are just providing support. There won’t be any party flags.” When the District Magistrate didn’t respond despite repeated attempts, Mr. Chaudhary tweeted: “144 reasons why I will go to Shamli on Friday.” 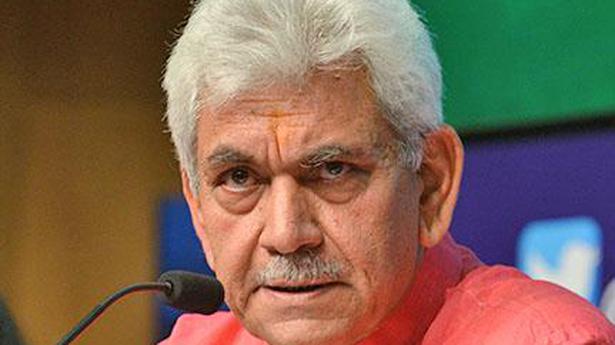 We cannot be selective in condemning violence: J&K L-G