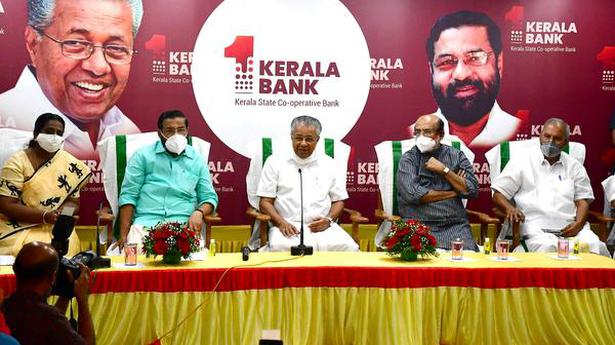 
A new governing council headed by CPI(M) State committee member Gopi Kottamurikkal assumed charge of Kerala Bank on Thursday, after the Left Democratic Front registered a landslide victory in the elections to the governing body.

Opening a new phase in the 105-year-old history of the Kerala State Cooperative Bank, which has been converted into Kerala Bank, the elected members assumed office in the presence of Chief Minister Pinarayi Vijayan, Finance Minister T.M. Thomas Isaac, and Cooperation Minister Kadakampally Surendran at its headquarters at Co-Bank Towers here.

Kerala Bank will open up new opportunities for the people, Mr. Vijayan said, and urged the Malappuram district cooperative bank, which has not merged with Kerala Bank, to join the initiative.

The elections to the governing body were held for the first time since the Kerala Bank came into existence on November 29, 2019 by merging 13 district cooperative banks with the Kerala State Cooperative Bank. The voters comprised representatives of 1,557 primary agriculture credit cooperative societies and 51 urban banks in the State.

Twelve out of the 14 elected members of the governing council are CPI(M) members. CPI and Kerala Congress (M) have one member each, G. Lalu (Kollam) and K.J. Philip (Kottayam).

In the first year, Kerala Bank achieved a business of ₹1,05,000 crore.