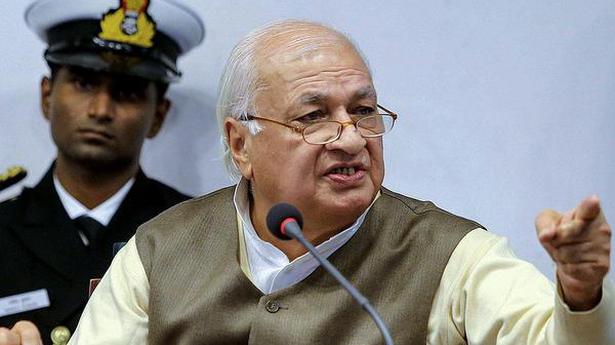 Kerala Governor Arif Mohammad Khan has signed an ordinance amending the Kerala Police Act purportedly to give the law enforcement more teeth to prosecute persons who exploit social media to target women and children, according to Raj Bhavan officials.

The State cabinet had in October decided to give an edge to the Kerala Police Act (KPA) by recommending the addition of a new provision, Section 118-A, to the law passed in 2011.

The amendment proposes five years of imprisonment and a fine of ₹10,000 for those convicted of producing, publishing or disseminating derogatory content through any means of communication to intimidate, insult or defame any person through social media.

The government had mooted the revision against the high-profile instance of a group of women activists taking the law into their own hands to confront a blogger who used his YouTube channel to broadcast abusive and derogatory comments against them.

The administration felt that the absence of an effective law to tackle online vilification would encourage more such instances of vigilantism.

The Communist Party of India, a coalition partner in the ruling Left Democratic Front (LDF), had questioned the necessity of such an amendment to the KPA.

It felt that the amendment granted wide latitude to law enforcers to crack down on freedom of speech and bully critics, journalists and commentators into obedience.

Leader of the Opposition Ramesh Chennithala had said that the amendment would reverse the course on media freedom, muzzle free speech and jeopardise civil liberties.

He said the amendment also granted the police untrammelled authority to examine published and broadcast content and register cases even in the absence of a specific complaint. Journalist unions had also expressed scepticism about the amendment.

However, the government had clarified that 118-A targetted slanderous social media and online content, and it did not seek to curb reportage, political satire or commentary, as feared. No need for religious conversions in India as Hindus are free to read Quran or Bible, says Uma Bharti

The BJP leader’s remark is in reference to the Madhya Pradesh Freedom of Religion Bill, 2020, which the State government