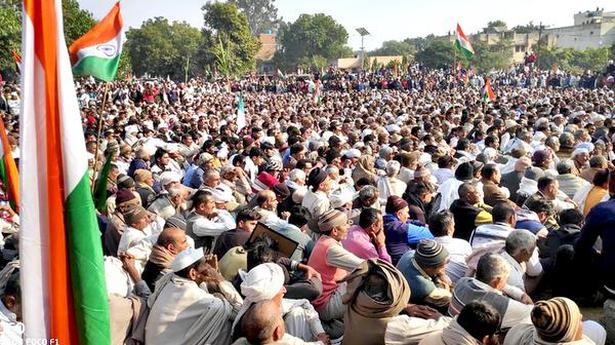 On Sunday, the scene shifted to Baraut town of Baghpat district where a panchayat of different khaps was called in response to the eviction of elderly farmers from a sit-in protest on the Baraut-Saharanpur highway.

Held after the emotional outburst of Bharatiya Kisan Union (BKU) leader Rakesh Tikait at the Ghazipur border, the panchayat saw the participation of Desh khap, Chuabisi khap, Chaugama khap and Thamba khap among others.

After the meeting, Desh khap head Surendra Chaudhary made an appeal to the farmers to move to Ghazipur border in turns.

He said the Additional District Magistrate and Circle officer of Baraut attended the meeting and promised that the cases against the farmers would be taken back and their belongings would be returned.

“The ADM regretted the forceful removal of farmers at night,” he said.

The farmers were removed from the protest site on Wednesday after the National Highways Authority of India made a complaint to the administration that the construction work was getting delayed because of the protest.

A local source said the administration tried hard to put a spanner by invoking Section 144.

“Even the tent houses were reluctant to provide material because of the administrative pressure but the sheer number of farmers that peacefully attended the meeting forced the administration on the back foot,” he alleged.

Circle Officer Alok Singh said no farmers were named in the FIR lodged by NHAI. “It is against unidentified persons and no specific site has been mentioned. It will continue to hold and be investigated,” he said.

Mr. Singh said that some belongings like mattresses and tents were seized from the spot and would be returned to the elders. “Farmers have decided to provide moral support to farmers sitting at Ghazipur border,” he said.

On violation of Section 144, Mr. Singh said a decision would be taken after consultation with the administration.