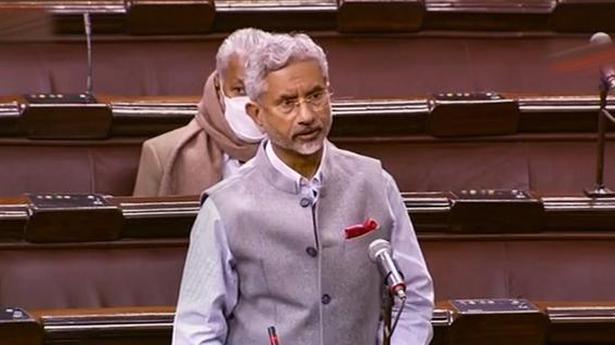 
India has taken up with Sri Lanka in the strongest terms the killing of Tamil Nadu fishermen in the island nation, and has made it very clear that such incidents are unacceptable, External Affairs Minister S Jaishankar told Rajya Sabha on Wednesday.

The statement came after Tamil parties raised the issue of four fishermen from the state being allegedly killed by the Sri Lankan Navy while fishing mid-sea.

“We have taken it up in strongest terms with the Sri Lankan government and this particular incident I think was particularly unacceptable and that has been made very very clear to them,” Mr. Jaishankar said.

Raising the issue through a Zero Hour mention, Tiruchi Siva of the DMK said four fishermen of Tamil Nadu were reported missing on January 19 and the Sri Lankan Navy informed that their bodies have been found in the Palk Strait four days later.

While the Sri Lankan Navy claims that the boat of the fishermen rammed into their vessel, the fishermen were brutally attacked and killed by the island nation’s Navy, he alleged.

Fishermen from Tamil Nadu have continuously faced harassment at the hands of the Sri Lankan Navy and have been forced to quit the profession, he said.

He sought condemnation of the incident by the Prime Minister and a quick and prompt response to ensure such incidents don’t take place. The government and the Prime Minister should “take the issue seriously and give hope and confidence that nothing would happen when they go out fishing,” he said.

M. Thambidurai of the AIADMK joined Mr. Siva in condemning the incident. He alleged that the Sri Lankan Navy has attacked and killed 245 fishermen from Tamil Nadu so far.

Sri Lanka was previously arresting fishermen and India would bring them back but the killing of fishermen is condemnable, he said, adding Tamil Nadu Chief Minister Edappadi K Palaniswami has written to the prime minister for taking necessary action.

“I request the external affairs minister to take necessary action and the prime minister to condemn this kind of activities,” he said.

Rajya Sabha Chairman M Venkaiah Naidu said this is an issue going on for a long time and it is not that nothing has been done. “Successive governments have been doing their best but the problem must be resolved is the suggestion of members and I hope the minister will take note,” he added.

NLC urged to fill up 90% of vacant posts with Tamilians

Boy dies on the spot as two-wheeler hits median