There were as many as 69 questions pertaining to the release of Karnataka Legislators Local Area Development Scheme (KLLADS) during the recent legislature session — an indicator of the anxiety over the delay in their release. However, MLAs seem less anxious to actually spend what is already in the kitty. Data shows that till September-end, they had spent no more than 11% of the allocated funds on an average.

However, under pressure, the government had, last month, released about ₹150 crore. It approved another tranche of ₹150 crore for the legislators to take up works in their constituencies last week.

In the past three years, funds under KLLADS have been trimmed on account of various reasons, including floods, rain damage, and COVID-19 pandemic.

Under KLLADS, each of the 225 MLAs and 75 MLCs receive ₹2 crore annually (a total of ₹600 crore) that can be used for the construction of community halls, for water projects and roadworks, among many other local work. However, during 2019-20 when the State severely battered by rains and floods, which affected 23 districts and left a trail of destruction, the funds were cut down to 50%. In 2018-19, the funds were cut by 25%.

“The government has been under pressure from ruling party legislators. Though the State is short on cash because of reduced receipts, the funds were released to keep the legislators in good books,” said a government source.

“The amount earmarked for the legislators’ fund is not big, but it indicates the direction of public expenditure, especially during the pandemic situation. In normal times, we see a progress of about 70%, and it is expected to come down drastically,” said the source.

Though there were efforts to divert the available funds towards pandemic management, the Finance Department did not approve this. “The officials and legislators also did not take up any work under the scheme, resulting in just about ₹88 crore being spent till September, including the ₹34 crore spent in that month,” added the source.

Govt. admits to not supplying food to school students as per food security law: HC 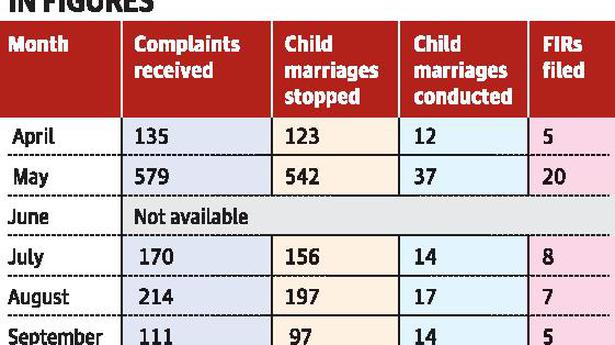 Child marriage complaints increased in May