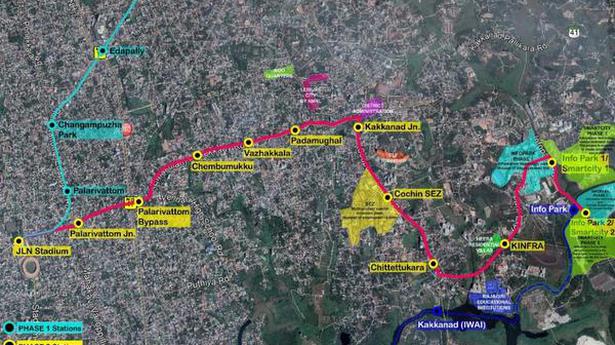 
The Kochi metro’s long-overdue 11.2-km-long Kakkanad (Infopark) extension – christened the Pink Line – has got the Centre’s approval, with ₹1,957 crore being earmarked in the Union Budget on Monday.

The amount includes the expenses for the project’s taxes and duties for the metro’s Phase Two extension to Kakkanad, that will take off from the Jawaharlal Nehru International (JLN) Stadium and terminate at Infopark. This will provide a metro-rail link between the city hub and the expanding IT hub, while also establishing metro connectivity from the city to the district headquarters, residential and industrial areas, and the SEZ located in Kakkanad.

The plan is to complete the project, which will seamlessly integrate with the 27-km-long Aluva-Thripunithura Phase One metro corridor, in another four years. It would considerably augment passenger patronage for the 27-km-long Aluva-Thripunithura metro network (referred to as the Blue Line), said Alkesh Kumar Sharma, Managing Director of Kochi Metro Rail Limited (KMRL).

There will be 11 elevated stations in the proposed metro corridor. Once realised, the corridor will also provide city connectivity to SilverLine, the semi-high speed rail corridor proposed from Thiruvananthapuram to Kasaragod, which is to have its Ernakulam station near Infopark. Both the mass rapid transport systems will most likely converge on the same premises or have a common station, so that commuters would not have to depend on alternative modes of transport while switching from the SilverLine to the metro rail and back.

Apart from SilverLine, the extension will provide multi-modal integration through the seamless integration of the metro with public transport buses, ferries and other commuting modes. The metro will act as a feeder service of the SilverLine. It would integrate with the Water Metro at Kakkanad and Infopark jetties, said KMRL sources.

“We will now start the development plan and the design process of the extension. The tendering process would be completed in the coming four to six months, following which the shortlisted engineering, procurement and construction (EPC) contractor can begin implementing the project,” said Mr. Sharma.

KMRL, which is implementing the metro’s extension from Pettah to Thripunithura, will execute the Kakkanad extension too. The Aluva-Pettah corridor was implemented by the Delhi Metro Rail Corporation (DMRC).

KMRL has begun preparatory work to carve out space for a metro viaduct along the 30-metre-wide Seaport-Airport Road, from the Collectorate Junction. Land acquisition, for which paper work is getting over, will shortly begin, to widen the JLN Stadium-Collectorate Junction stretch into a 22-m-wide stretch.

The proposed metro extension will also reduce congestion on roads, since it will offer a safe, fast and comfortable mode of commute. It will also provide continuous availability of affordable, reliable and energy-efficient transport system in the urban agglomeration of the city. The other benefits include reduction in number of accidents, pollution and travel time, said metro sources.

Doctors in Tiruchi shut down OP services in protest against ‘mixopathy’ Over 750 students, staff in Tennessee test positive for COVID-19