Industries and IT Minister and TRS working president K.T. Rama Rao has faulted State BJP president Bandi Sanjay Kumar for his claims on funds released by the Central government to Telangana.

He accused Mr. Sanjay of spreading lies on funds released to the State by the Centre and said that the Centre was in fact “diverting the State’s contribution to the tax pool to BJP-ruled States like Uttar Pradesh”. “Taxpayers’ money is being diverted from Telangana to other States,” he said.

He asserted that he was prepared to quit his ministerial post if Mr. Sanjay’s claims were true. “I am prepared to resign as a Minister if Mr. Sanjay can prove his claims. He should substantiate his charges with proofs or else quit from his post,” KTR said.

Mr. Rama Rao was addressing a public meeting in Jogulamba Gadwal district on Tuesday, after participating in a series of functions marking the launch of several developmental works in the district being taken up at a cost of ₹104 crore. Several Ministers and senior officials toured the district in the recent past to assess the development there and plan works accordingly.

He recalled the spree of initiatives such as Rythu Bandhu, Rythu Bima, Kalyana Lakshmi and KCR Kits, launched by the State government and said that these schemes instilled confidence in people. “The BJP leaders are making tall claims about development by their government, but none of the innovative schemes launched by the Telangana government are in operation in BJP-ruled States,” he added.

The TRS working president also took potshots at Telangana Congress chief A. Revanth Reddy claiming that the man who was caught red-handed with money bags was criticising the government committed to the welfare of all sections. “Congress has a reputation of denying power to the farm sector and is solely responsible for the backwardness of the erstwhile Mahabubnagar district,” he said.

“The steps initiated by the TRS government have ensured that the drought-prone district is fast returning to normalcy and there is reverse migration. Congress is a party without future. But some leaders are under the impression that criticising Chief Minister K. Chandrasekhar Rao will enhance their public acceptability,” he said.

He took objections to the charges made by former Minister and BJP leader D.K. Aruna against the government. He advised her to instead work for inclusion of Valmiki Boyas in Scheduled Tribes. “The government has forwarded a unanimous resolution passed by the Legislature in this regard and Ms. Aruna should take up the matter with the Central government if she is indeed committed to the development of the community and the district.”

KTR advised farmers to go for alternative crops rather than paddy cultivation as the Food Corporation of India refused to procure it. Farmers should also express their protests against the Centre from different forums, he said.

Call to increase awareness on stroke, its effects 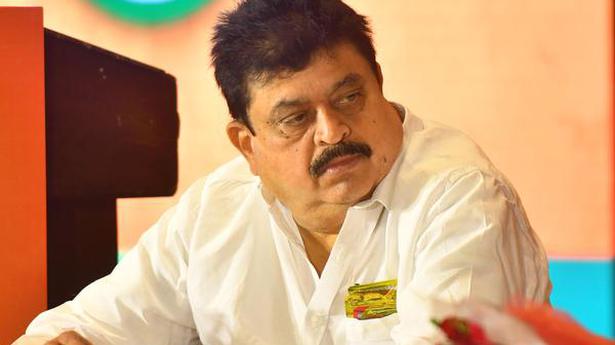