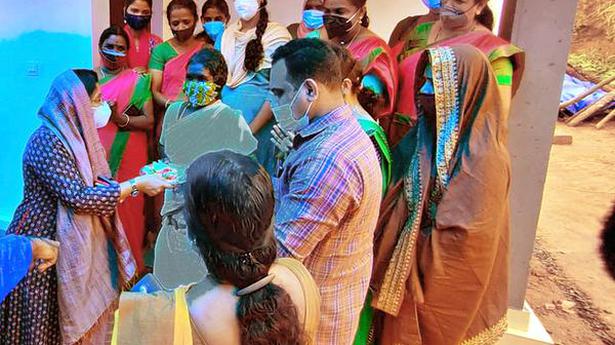 
Members of women construction groups under the District Kudumbashree Mission in Wayanad have proved their mettle in house construction as they have completed building 25 houses in a short span of time.

As many as 74 Kudumbashree members of 17 construction groups, each group comprising four to six members, are working in the sector now.

The Mission had provided 53 days’ training for members on all aspects of construction work with the support of the Wayanad Social Service, an NGO in the district, and Rural Self-Employment Training Institute here two years ago.

“Now, our group is able to undertake all works related to the construction sector, including electrification, painting and plumbing, without outsourcing workers, except for works like concreting roofs,” says A. Veena of the Sree Deepam construction unit at Panamaram in the district.

‘We do not expect a huge profit from the venture, except our daily wages,” she says.

Recently, the government had issued an order to permit the agencies to undertake the construction works of civic bodies, the Public Works Department and the Kerala Water Authority below ₹2 lakh, Ms. Sajitha adds.

The Tribal Development Department had recently handed over the construction works of six houses, each house at a cost of ₹6 lakh, for homeless tribespeople on the banks of the Karapuzha river at Poothamoola near Muttil to three groups.

Each house has two bedrooms, a hall, a kitchen and a toilet. They could complete the construction works in six months even during the pandemic period. Former District Collector Adeela Abdulla inaugurated the houses by handing over the keys to the beneficiaries.

Antigen test once in 14 days must for govt. staff in Kasaragod