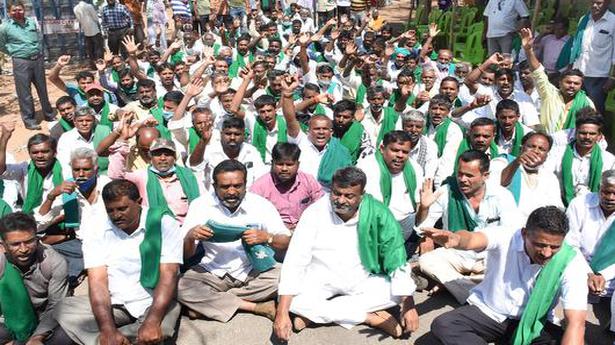 
Hundreds of farmers belonging to Karnataka Rajya Raitha Sangha (KRRS) and Hasiru Sene staged a protest in Mysuru against land acquisition for the new highway linking NH 275 and connecting to Madikeri.

The project requires over 900 acres for which the land acquisition process has commenced but the farmers claimed that they have not been consulted.

Badagalpura Nagendra of the KRRS said a protest against the project launched sometime ago forced the government to stall the project but there are indications of the works commencing once again.

He said the existing Mysuru-Bantwal highway provided a link to Madikeri and the same stretch could be further upgraded without causing further diversion of farm land for infrastructure development. The KRRS activists said the proposed alignment of the new road cuts through the Lakshmanthirtha and Harangi command areas and thousands of families will be left in the lurch if the land was acquired.

The KRRS activists said the new project requires 900 acres of land most of which is highly fertile and irrigated tracts with coconut plantations. Acquiring farm land will throw out hundreds of farmers out of work and render them unemployed.

The farmers also said the compensation by the government does not merit serious consideration as the rate quoted was way below the prevailing market rate. Any compensation paid dissipates within matter of years and the land losers tend to be on streets eking out a living as daily wagers, according to the activists.

The agitating farmers groups said though the land in question is highly fertile and irrigated, the government has pegged the cost of acquisition at ₹1 crore per acre and said that it was inadequate.

Drawing attention to similar land acquisition exercise in the past, the farmers said that the government had procured land at the cost of ₹36 lakh per acre for a housing society in Naganahalli way back in 2008 and hence the present valuation of ₹1 crore was an under-estimation. They wanted all works related to the project to be disbanded until the issues raised by them were resolved.

10 booked on the charge of auctioning GP seats