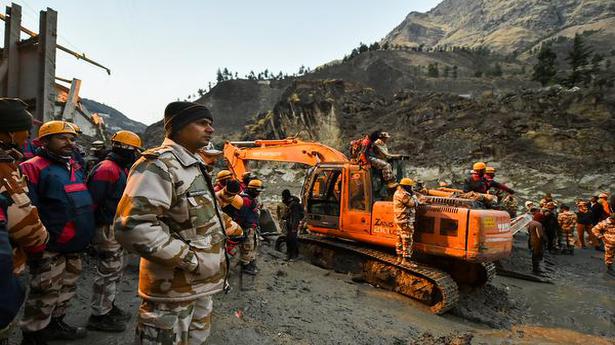 
Though the jury is still out, glaciologists and experts in rock sciences are converging around the view that the cause of the Chamoli deluge was most probably a landslip and not a glacial lake burst.

Glacial Lake Outburst Flooding (GLOF) occurs when a breach in the glacial lake causes an outpour downstream. Such lakes are formed when glaciers erode land, melt and over time become a large mass of water in the depression formed and these can be breached, causing floods downstream. However, several scientists based on an analysis of satellite images have failed to spot any such lakes.

Also read: Explained: How glaciers, glacial lakes form and why they break

The Central Water Commission monitors and prepares monthly reports on the state of glacial lakes and water bodies 10 hectares and above via satellite and nothing out of the ordinary was observed. However, it is possible that smaller pockets of water exist that haven’t been caught in the satellite images, that may have flooded. “There’s a bit of a mystery and it will be some time before the causes can be determined,” Sharat Chandra, Director, CWC told The Hindu.

The CWC constituted a team of experts on Monday to investigate the possible causes.

Other experts opine that large mass of rock or debris might have impacted the glacier and triggered an avalanche.

Kalachand Sain, Director, Wadia Institute of Himalayan Geology, said apart from glacial lakes not being observed, the glaciers were extremely steep and preventing water from accumulating enough to form such lakes. “A sudden surge of water is surprising and had it been from a broken glacier, we would be seeing a continuous flow of water. Right now this appears to have stemmed,” he said.

On Monday morning, an official Twitter account of the CWC reported a “possible second wave of flood” in the early hours of Monday with water-flow monitors recording a surge and then again ebbing within an hour. “The second wave doesn’t seem concerning and as of now water levels are back to normal.”

The winter season would make it extremely hard and the ensuing damage to the connecting roadways make access difficult to reach the glaciers.

Satellite data observations showed that until February 6 there was significant snow but the cover appears to have significantly reduced the next day. “That’s surprising and what we need to find out. What caused this reduction? Did anything happen upstream? Did rocks or boulders fall on the glaciers causing an outpouring of sediment, debris….we need to figure out.”

Mr. Sain said his colleagues — a team of five — were on the road to Joshimath, close to the spot, for further studies.

Dan Shugar, a geomorphologist at the University of Calgary, Canada, said on Twitter preliminary analysis of satellite imagery suggested that the event was a landslip. A part of a glacier — and Mr. Shugar suggested he is unsure if it is the Nandadevi glacier — may have broken off and become rock and ice avalanche that later turned into a flood.

Fracture of a hanging glacier

Mohd. Farooq Azam, Assistant Professor, Glaciology & Hydrology, IIT Indore, offered a hypothesis again ruling out a GLOF. “We can now say with some belief that the incident occurred due to the fracture of a hanging glacier [about 0.2 sq km in size] together with snow and rock avalanches, at 5,600 metre altitude near the Trishul Peak. Though it is hard to fully ascertain the source of the water and slurry which was seen in the videos yesterday [Sunday], our current hypothesis is that the water accumulated locked in the debris-snow below the glacier was released when the glacier-rock mass fell. This was a drop of almost 2 km before hitting marshy land. Since the temperature in the region is sub-zero, river level is much lower than it would be in the monsoon season.”

Since 2017, debris and snow had been accumulating at the bottom of the glacier. The stream flowing out from it earlier was very clear, but after 2017 the glacier stream has been hidden below the accumulated debris-snow. It was possible that the debris-snow would have been absorbing and collecting water coming from the upstream glaciers and that could have been released when the ice-rock avalanche hit it, Mr. Azam said. House of cards: Long backstory to the political developments in Puducherry