It was to find out if the corpn. has made arrangements for supplying water

Gopala Rukmini shows the bucket full of water she is using for washing utensils. “This is part of the water supplied today. We have to sparingly use water that is supplied once in two days,” said Ms. Rukmini, who is among the members of seven families staying in the Kudupu Mandara area that was ravaged by garbage slip from the Pachchanady landfill site in August 2019.

Ms. Rukmini’s neighbour Gopala Mandara said that water is supplied for an hour in the morning on alternate days. “If we need more water, we pool in money to get a water tanker for ₹ 1,100 that serves only two houses. We have to make our own arrangements for tanker supply. The Mangaluru City Corporation does not provide it,” he said.

Ms. Rukmini and Mr. Mandara were among the residents of Kudupu Mandara who shared their feelings before Shilpa A.G, Member Secretary of Dakshina Kannada District Legal Services Authority (DKDLSA), during her visit to the area on Tuesday. Ms. Shilpa and a team of advocates on the panel of DKDLSA visited the area after a direction from the High Court of Karnataka to file a report whether the city corporation has provided water supply to Mandara residents and made alternative arrangements in case of water scarcity.

The city corporation has also said that it has made arrangements for supply of water in tankers.

Another resident Nagaraj said that he receives water every day as his house comes under the Pachchanady ward.

The remaining six houses in the Kudupu ward receive water on alternate days, he added.

Yet another resident Karunakara, who is among the members of 18 families that have been rehabilitated in a residential apartment in Kulashekara, said that he visits his ancestral farmland every day and carries out farming during the day.

He showed Ms. Shilpa one of the two wells on his land where water has become contaminated.

He uses water from another well and also sources water from a nearby pond. To prevent skin irritation from exposure to groundwater, he is forced to take up farming using gloves and gumboots.

Umesh K. said that because of the ongoing litigation in the High Court, the city corporation is delaying payment of compensation for the loss of crops.

Rajesh Bhat Mandara, a relative of Mandara Keshava Bhat, author of Tulu Mandara Ramayana, whose ancestral house is among the ones that bore the brunt of the garbage slip, sought DKDLSA’s help in getting compensation for residents who are really affected because of the garbage slip. 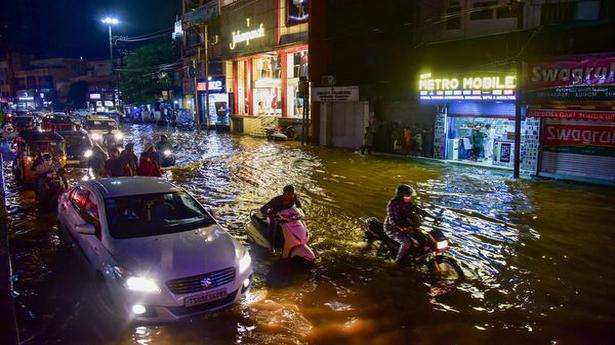