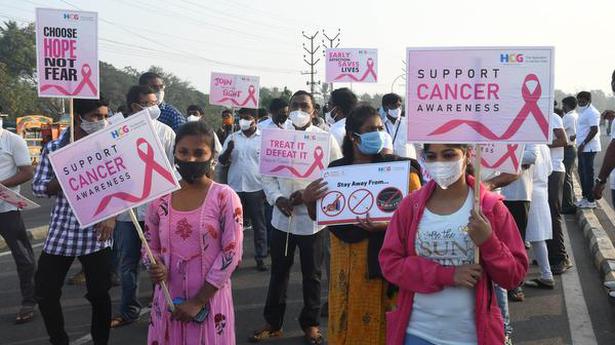 
Students, police, health care professionals and young athletes highlighted the need for awareness on cancer in the walkathon organised by The Hindu (Future India Club) in association with HCG City Cancer Centre on Thursday to mark World Cancer Day observed on February 4.

Commissioner of Police B. Sreenivasulu flagged off and led the walkathon along with the management and medical team of the HCG Cancer Centre.

Speaking on the occasion, Mr. Sreenivasulu said that cancer had been haunting the world for decades and was caused by various factors. While some types of cancer were caused by genetic issues, most were caused due to smoking and other habits. Detection of cancer played a key role in treating it. People should look for certain symptoms and consult a doctor, if needed. Most types of cancer could be cured with proper treatment and early detection, the Police Commissioner said.

HCG medical director Dr. M. Gopichand said that 10 million people die across the world due to cancer every year, and in India, around 12 lakh cancer cases are detected every year and eight lakh out of them succumb to it.

He said that at least one-third of the cancer cases were preventable by making lifestyle changes and avoiding smoking and consumption of alcohol.

The walkathon which began at Padavalarevu Centre on BRTS Road ended at the G.V.R. Govt. Music and Dance College.

Students and NSS Volunteers from Nalanda College, Madonna College for the Deaf, KBN College, SRR & CVR Govt. College and young skaters were among those who took part in the walkathon.

The event highlighted the World Cancer Day theme “I can, we can”.

‘CBI has become a pet of Prime Minister, Chief Ministers’