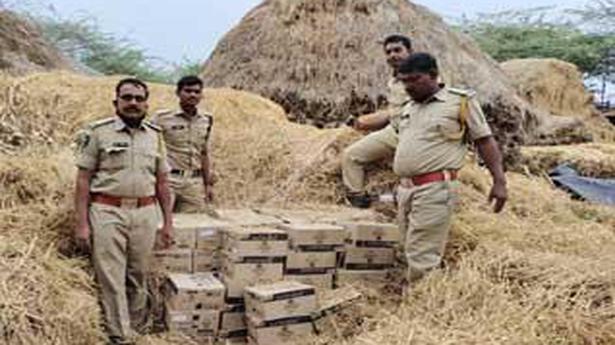 SEB, Police, Excise officials seize over 50,000 bottles of alcohol; over 5,000 persons arrested in the last month

Liquor and freebies were widely distributed at several places across the State to sway voters during the ongoing gram panchayat elections.

The Special Enforcement Bureau (SEB), Police and Excise department personnel seized over 50,000 bottles worth lakhs of rupees in the last month alone.

SEB Commissioner Vineet Brijlal said that over 5,000 persons who were smuggling Non-Duty Paid Liquor (NDPL) from neighbouring Telangana, Karnataka and other States have been arrested.

Besides, SEB officials destroyed 15.68 lakh litres of fermented jaggery wash, 36,577 litres of ID liquor, 7,396 kg of black jaggery, four kg of gold ornaments, 439 gm of diamonds, 57 kg of ganja, 100 kg of silver jewellery and 35 saris, which were reportedly meant for distribution to the voters during the panchayat elections.

“The SEB team led by ASP S. Gowthami seized 12,192 bottles of liquor hidden under hay stacks at Chippagiri village in Kurnool district on Saturday. The NDPL was seized from Karnataka State. In another raid, SEB officials recovered 6,168 bottles of liquor at Thumukunta checkpost in Anantapur district,” Mr. Brijlal said.

The East Godavari police reportedly seized pressure cookers which were about to be distributed to voters.

Community elders organised meetings in some gram panchayats and issued a ‘durai’ (diktat) to the families to vote for the candidates finalised by their community heads. The elders warned that those violating the diktat will face action.

“In some villages, voting depends completely on caste while in some panchayats money played a vital role. Many candidates gave freebies to the voters,” said P. Venkanna of Undi in West Godavari district.

West Godavari district Superintendent of Police K. Narayan Naik said that vigil has been tightened along the borders and added that a huge quantity of NDPL being smuggled from Telangana was seized.

MeD ROBO gets an upgrade at DLS 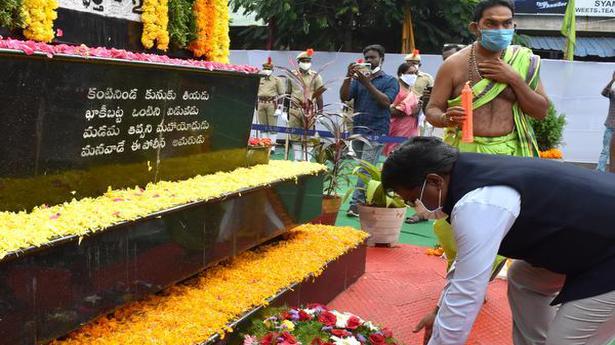 Collector assures kin of police martyrs of all help