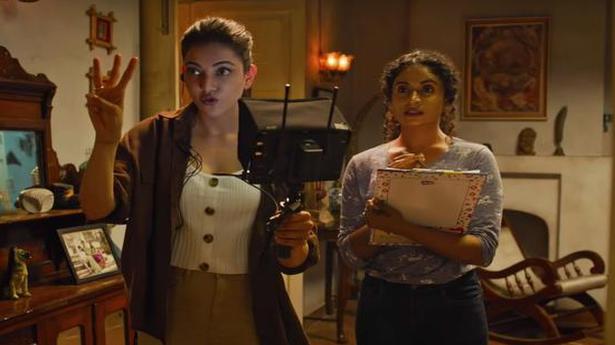 The show, headlined by Kajal Aggarwal, is about a television crew that wants to make a reality show and how they get trapped in a haunted house

“I started writing this story back in 2005,” recalls filmmaker Venkat Prabhu, who is making his streaming directorial debut in an over-the-top (OTT) platform with Live Telecast, a seven-episode horror series on Disney+ Hotstar. What was supposed to be his debut as a film director was put on hold after his friend and film producer S.P.B Charan said that it would not be feasible budget-wise as a film.

The two eventually went on to make the 2007 sports drama Chennai – 600028, which marked the debut of Prabhu as a director on the big screen. “I am making my first script into my first web series now,” he says with a chuckle.

This web series is about a television crew that wants to make a superhit reality show, and how they get trapped in a haunted house while the cameras are rolling. The episodes were shot in a building amidst the hills in Yercaud in 2019. “What if Bigg Boss [a popular television reality show] goes wrong? That is the concept,” Prabhu says.

The filmmaker also shared another interesting instance where actor Vijay expressed interest in financing this project. The two were having a discussion nearly a decade ago about Prabhu’s entry into filmmaking when he told Vijay about the first script that he wrote. An excited Vijay immediately offered to produce this as a movie. “He didn’t want to act. He liked the script so much that he said that he would produce it,” Prabhu recalls.

This discussion happened after the Ajith Kumar-starrer Mankatha, which was directed by Venkat Prabhu, enjoyed commercial success upon its release in 2011. “After that, we never followed it up,” he says, noting that both got busy with their respective projects.

Live Telecast boasts an ensemble star cast with Kajal Aggarwal in the lead along with Vaibhav Reddy, Anandhi, Daniel Annie Pope and Subbu Panchu Arunachalam. “I thought we needed a face like Kajal [Aggarwal] with a pan-India image,” Prabhu says.

While the series will be a horror-thriller, it will not resemble any other popular television or web series based on supernatural elements such as Stranger Things, he asserts. “I am trying to do something very Indian, very ‘us’.” His intention was that the appeal of this web series will not be limited to audiences in the big cities. “Those in Madurai, Coimbatore, Salem and rural areas must be able to relate with this,” he says.

The filmmaker also revealed that he is working on a 3-D animated film for children along the lines of Toy Story and Ice Age series. “I really want to explore that because we don’t have anything for kids here,” he says. Plans are on to rope in popular actors to lend their voices for this project, he says.

On whether Live Telecast will have only one season, Prabhu says that it depends on the reception that the show receives. “If people like it, we will go ahead with the second season.”