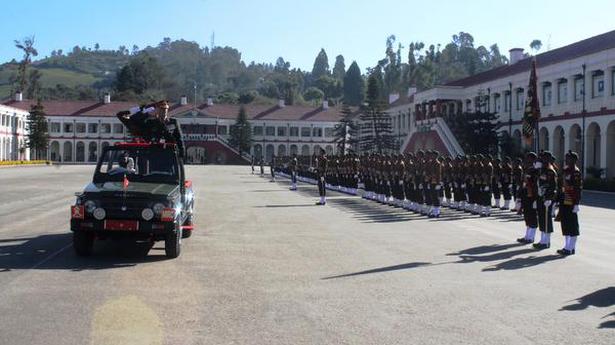 
The Madras Regimental Centre (MRC) at Wellington near Coonoor did not miss a single day of training despite the COVID-19 pandemic and has continued to despatch trained soldiers to all the Battalions of the Regiment, Commandant of MRC Brigadier Rajeshwar Singh said on Saturday.

He reviewed the Attestation Parade held at Shrinagesh Barracks of the MRC, where 395 recruits were attested into the Madras Regiment of the Army after a year-long basic and advanced military training. A press release said that this was the highest number of recruits to be attested in the “entire training year and under the prevailing pandemic conditions”.

The parade was held with personal distancing norms in place as part of the COVID-19 precautionary measures. Following the parade, Brigadier Singh awarded medals to outstanding recruits, the release said.

Brigadier Singh congratulated the recruits and commended the efforts of the instructors and staff members at the MRC, the oldest infantry regiment of the Army. He also congratulated the parents of the recruits, who were not present in the audience due to the pandemic-related restrictions, according to the release.