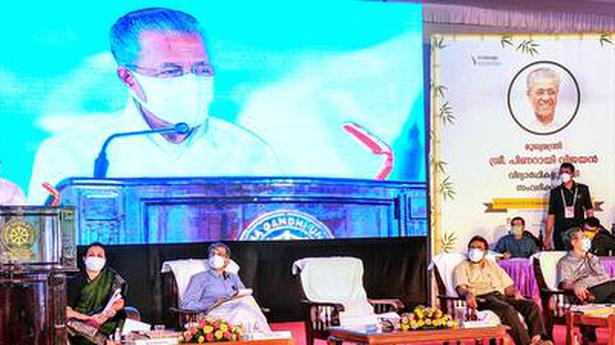 
Chief Minister Pinarayi Vijayan on Monday called for a major overhaul in the State’s higher education sector in keeping with the changing times to include the ideas and aspirations of the student fraternity.

He was interacting with a select group of students at Mahatma Gandhi University, Kottayam and the Sree Sakaracharya University, Kalady as part of the Navakeralam Yuvakeralam programme.

Highlighting the need to bring in major changes in the State’s education sector to develop Kerala as a hub of higher education, the Chief Minister said steps were being implemented to provide vocational training along with education.

“The higher education sector of Kerala should change in line with the changes taking place in the field of science and technology across the globe,”’ the Chief Minister noted.

During the interaction, as many as 24 students presented their concepts on higher education in front of the Chief Minister.

In his response, Mr. Pinarayi said the State government had already announced a system that would enable students to work while studying.

Though a plan was also in place to reschedule the study hours accordingly, it failed to materialise in view of the COVID-19 situation. Depending on the pandemic situation, the system will be implemented from the next academic year onward.

Meanwhile, the MGU senate members owing allegiance to the Congress on Monday termed the event a pre-election stunt with a clear political agenda.