Four people, identified as Anjum (36); Mohammad Mohsin (27); Sarfraz Alam (23) and Meraj (21), all residents of Jajmau’s Wajidpur, have been arrested,

A 25-year-old youth was killed and several injured here in a clash between two communities that erupted after a man was accidentally splashed with water, police said on Monday.

Taking note of the incident, Chief Minister Yogi Adityanath has instructed that the accused be booked under the stringent National Security Act, which allows preventive detention for up to a year.

Two policemen have been removed for their alleged laxity.

Police personnel, including the Provincial Armed Constabulary, have been deployed in large numbers to keep tabs on the simmering tension at Chakeri locality after the incident late Sunday evening.

The SP said Pintu Nishad, 25, and his friend Sandeep left their homes in Wajidpur area and accidentally stepped on a water pouch lying on the road. The water splashed on Amaan, a resident from the same area, sparking a clash.

Hearing about the altercation, dozens of other locals reached the spot and pelted each other with stones, injuring Nishad and several others, he said.

In a tweet, the Chief Minister’s Office said, “Instructions have been issued to immediately arrest the accused and invoke the National Security Act against them. A financial assistance of ₹ lakh from the Chief Minister’s Relief Fund has been announced for the aggrieved family.”

Under the NSA, one can be detained without a charge for up to 12 months if the authorities are satisfied that the person is a threat to national security or law and order.

Meanwhile, the Jajmau’s police post in-charge and a constable have been removed for their alleged laxity and sent to the Police Lines, officials said.

An inquiry has also been instituted against the police personnel who were deployed with the police response vehicle (PRV) and were sent to the incident site. They allegedly did nothing and remained a mute spectator, said SP Agarwal. Assistant SP (Cantonment) Satyajeet Gupta has been asked to probe the matter and submit the report with the district police chief in a stipulated deadline, the SP added.

Agarwal said family members of the deceased and local residents blocked a road and demanded from Divisional Commissioner Raj Shekhar to get illegal colonies in the area vacated.

The divisional commissioner announced to form a three-member committee headed by the additional city magistrate (ACM) and senior officials of the Kanpur Municipal Corporation and the Kanpur Development Authority to look into the matter. 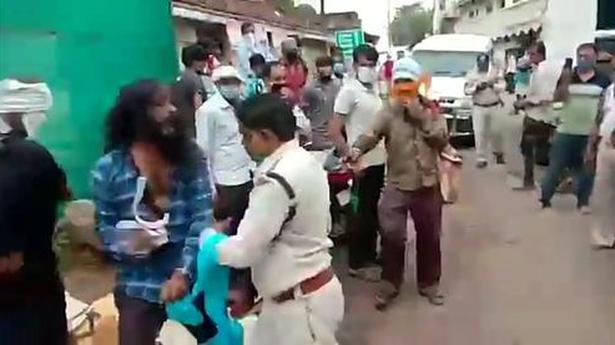 Cabinet nod for AIIMS in Bihar