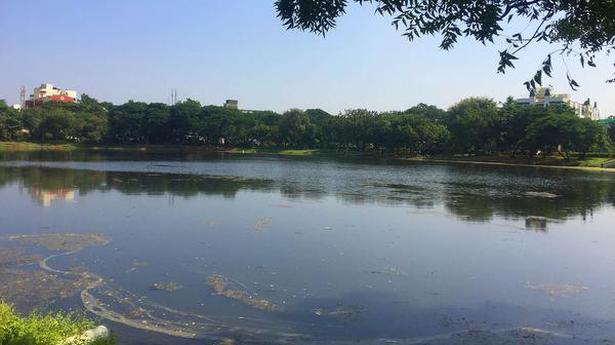 Mangal Eri Park — also known as Arignar Anna Park — on Vellar Street in Mogappair West is now a feast for the eyes. Coupled with a good monsoon, timely restoration work by the civic officials of Zone 7, the Eri is almost filled to brim.

As part of the restoration, widened stormwater drains on adjoining streets and lanes were connected to the pond through a network of pipelines.

The pond was desilted and deepened after being rid of thick vegetation. Staircases were built on all four sides of the waterbody for visitors to access it. Weeds that had grown between the compound wall and the walkers’ pathway, which is around 30-feet wide, were pruned.

A small portion of space inside the park has also been converted to handle garbage, mainly consisting of dry leaves from the park.

“The excess rainwater in the pond will help recharge the groundwater in its vicinity that is thickly populated,” says S. Venketaramani, a long-time resident of Mogappair. Over 2,000 visitors, mainly walkers from Mogappair West, Reddipalayam Nagar, Mogappair East, J.J Nagar, Nolambur, Maduravoyal, Collector Nagar and Tirumangalam visit the park, one of the biggest public spaces after the Tower Park in Anna Nagar every day.

Since 2017, Greater Chennai Corporation has been restoring the Eri as a ‘Model Park’. A concrete median, 1.5-feet tall and provided with enough space for saplings to be planted in it, on either side of the walkers’ pathway, de-silting and deepening the pond to a depth of around three metres and provided with steel railings, a yoga and meditation centre, a children’s play area, a pebble pathway and a clock tower were among the other highlights of the project. At present, the walker’s pathway is around 4.5 feet wide and 520 metres long.

Residents and visitors also want the pond to be fully fenced to prevent children and students from going near it. “Steps will be taken to ensure safety of visitors at the park,” says a Corporation official.