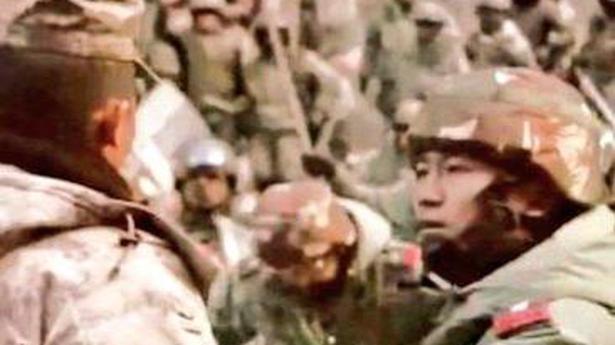 The Indian Army officer who was seen raining blows on a Chinese soldier in a video of the last year’s June 15 Galwan incident, recently released by the Chinese State media, was felicitated by Manipur Chief Minister N. Biren Singh on Tuesday.

Captain Soiba Maningba Rangnamei of 16 Bihar regiment was identified from the screen-grab of the 2.14 minute video released by China’s state media on February 19.

Mr. Singh told The Hindu, “We wanted to honour his courage and valour. I told him that he has enhanced Manipur’s image and if required we will provide him assistance to build a house and any other help that he requires.”

Capt. Rangnamei was a student of Sainik School, Imphal. A resident of Senapati district in Manipur, he was commissioned in the Army in 2018.

Mr. Singh tweeted, “It’s an honour to meet Capt. Soiba Maningba Rangnamei from Senapati, Manipur of 16 Bihar, leading his men in Galwan during the confrontation against the Chinese PLA…We are always indebted to soldiers like him who is leading in the front for the safety and security of the Nation.”

The Chief Minister also said the State was planning to install the tallest national flag in the country at Moirang. It was at Moirang that the flag of the Indian National Army (INA) under Netaji Subhash Chandra Bose was first unfurled on April 14, 1944.

“We would get the necessary clearance and install the tricolour that will be the tallest in the country; it will be a befitting tribute to Netaji,” he said.

As many as 20 Indian army soldiers were killed in Galwan on June 15, 2020 in a violent clash with China’s People’s Liberation Army (PLA). China for the first time admitted last week that four soldiers were killed in the clash. The video showing Capt. Rangnamei and other soldiers charging at the Chinese PLA was released when India and China were in the middle of withdrawing troops and armament from the north and south bank of Pangong lake in Ladakh after eight months of face-off.