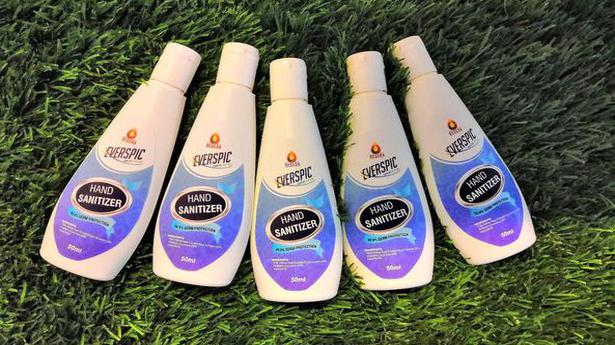 MyGov, the citizen engagement platform of the Government of India, and UN Women, held the COVID-19 Shri Shakti Challenge to encourage and involve women-led start-ups to develop innovative solutions to fight against Coronavirus. Of the 1,265 entries received from across the country 25 were shortlisted and 11 were chosen for the final stage. MetroPlus catches up with the three winners of the challenge — P Gayatri Hela, Romita Ghosh and Anjana Ramkumar-Anusha Ashokan.

“Among the key ingredients in the sanitiser is tulsi, aloe vera and citrus-based extracts. Research has proved that it is not mandatory to have alcohol in hand sanitisers. There are many side effects to alcohol. Alternates like silver and plant extracts are safer alternatives,” says Gayatri, founder and director of Reseda Lifesciences Pvt Ltd, Bengaluru.

The sanitiser is among the products in Reseda’s COVID kit, which includes disinfection and sanitisation spray, aerial sanitisation additive, textile hygiene finish and paint hygiene additive, she adds.

Gayatri, who has a doctorate in chemistry with focus on dietary antioxidants, has had research experience with institutions in the UK, France, the US and Taiwan before turning entrepreneur. It all began in 2003 when she was in Taiwan with her one-year-old daughter while doing her post-doctoral research. It was then that SARS broke out in the area they stayed. “We had to take many precautions then. After SARS, the world has seen the outbreak of several other deadly diseases. I related it to the irrational use of chemicals that has deteriorated the human immune system and improved that of the pests and germs. The solution is to go back to nature and plant based-ingredients,” explains 49-year-old Gayatri.

With a proven product line of 144 products and patented technology, she incorporated Reseda in 2017. An R&D company, it has developed products for pest and germ control, which include plant immunity boosters, and a range of products for personal and home care.

Gayatri points out she has been working with farmers directly for the raw materials, thus creating a business model. “There was a stage when I thought about closing down Reseda following a series of failures. Retrospection helped me bounce back. I have had a strong support system in my family — my daughter, M Siri, mother P Sundari, sister P Srilalitha and niece, Gowthami CV, who are partners in Reseda,” says Gayatri.

RoAR Steriliser, developed by iHeal HealthTech Pvt Ltd is a UVC cabinet in which the PPE (Personal Protective Equipment) kits can be spread out and every inch of it is exposed to the radiation, says Romita.

The 35-year-old says that when COVID-19 cases surged in the country, frontline warriors were at risk for want of PPE kits and other protective gear. “Initially the kits were imported from China. Although India started manufacturing PPE, the supply chain was affected because the country was in lockdown. Moreover, the kits were being sold at exorbitant rates. With the product in short supply, doctors and health workers were forced to use the same kit for hours on end, thus becoming agents for further spread of the disease. In addition, used kits were getting dumped outside hospitals thus adding to bio-waste,” she says.

Romita observes that reusing the kits will save the money spent on procurement and transportation. The steriliser can be used across all kinds of health centres, such as testing centres, clinics, hospitals, public health centres, containment zones, quarantine facilities, laboratories and the like. If the user is exposed to huge viral load, it has to be sterilised frequently.

Formed in 2018, iHeal (known by the brand name MedSamaan) has its headquarters in Shimla and has a branch in Delhi. “With hospitals in Delhi coming forward to associate with us, we hope to manufacture five devices per month. Once we get more funds, we want to take it to 25,” says Romita. The company is looking for partnerships in South India as well, especially in Kerala. “Our plan to open a branch in Kochi had to be postponed because of the outbreak of the pandemic,” she says.

A double major in biotechnology and biochemistry from the University of Kerala and an MBA holder in Biotechnology Management, Romita says that she ventured into healthcare because of her tryst with cancer at the age of 13. “I chose this field to bring about tangible changes in people’s lives,” she says.

While she started her first venture in 2009, it was later sold off and her second start-up didn’t do well. In 2011, she started Admirus Marksol Pvt Ltd, a multidisciplinary organisation that helps medical device manufacturers expand their market in India, followed by iHeal in 2018.

With India continuing to import 75% of medical devices Romita says that she is proud to have contributed to Make In India initiative. “What keeps me going is my purpose to have a meaningful life. Life itself is much bigger than any success or failure,” she signs off.

Product: Anti-microbial spray that converts any kind of cloth into a mask

“Many people use handkerchief, dupatta, scarf or sari instead of masks. When you spray this solution, an unique fabric-binding formulation forms a thin anti-viral/anti-bacterial coating on every fibre of the cloth, thus sterilising the surface,” says Anjana, co-founder of Kochi-based Thanmatra Innovations Pvt Ltd and product development manager.

Anusha, another founder and director of Thanmatra, adds that there are many people who can’t afford disposable masks and thereby depend on regular clothes when they step out. “You can use this spray on the cloth mask you are using at your workplace, while using public transport or eating out,” she says.

Even though the solution has been proved effective for use for a full working day, the team is doing further studies. If needed, you can respray the solution on the cloth, Anjana adds. The start-up has a small manufacturing unit at Kalamassery. “Now, we can produce 1,000 litres per week and with more funds we look at increasing it to 10,000 litres,” Anusha says.

Anjana, 31, has completed her PhD in healthcare design from Netherlands, after which she joined the Amrita Centre for Nanosciences and Molecular Medicine. It was there that she met Anusha, 34, who had completed her PhD in nanomedicine. Currently, Anusha is working as a faculty at the Department of Biotechnology, Cochin University of Science and Technology.

Anti-microbial spray of Thanmatra Innovations Pvt Ltd that converts any kind of cloth into a mask
| Photo Credit:
Special arrangement

“We have a fabulous team that has been working on tackling a bigger problem, which is cancer. So this concept was pretty simple compared to that. In fact, while waiting for a breakthrough in our cancer research we were also looking at new areas of work. Eventually, the pandemic turned out to be the one,” Anusha adds. 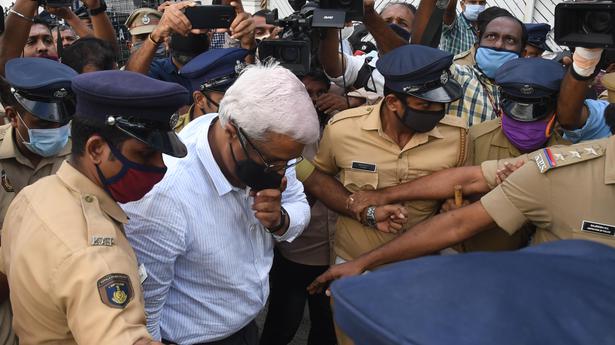 As COVID threat continues, reopening of beaches remains a challenge in Kozhikode