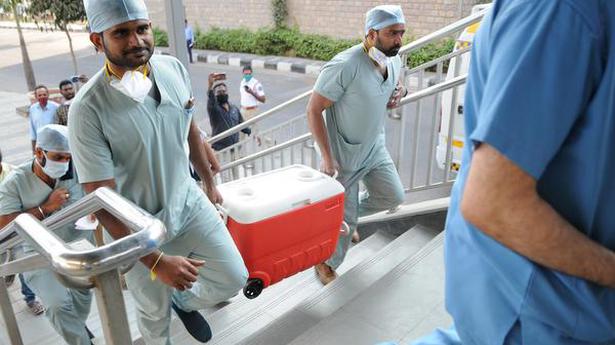 
For the first time in Telangana, Metro Rail was used to transport an organ from one hospital to another for transplantation. Hyderabad Metro Rail created a special green corridor between Nagole and Jubilee Hills to facilitate non-stop transport of a heart from Kamineni Hospital, L.B. Nagar, to save a patient admitted at Apollo Hospital, Jubilee Hills, on Tuesday.

Usually, roadways is used to transport organs intra-city. Though traffic on road could be cleared to establish a green channel for transporting organs, surgeons felt the heart, in this case, could be transported faster through Metro Rail.

A special train was arranged at Nagole, which picked up the heart at around 3.30-4 p.m., pacing through the entire stretch of 21 km and crossing 16 stations between Nagole and Jubilee Hills. It took less than 30 minutes for the train to reach Jubilee Hills, rushing with an average speed of 40 km/hr. All stations were kept on guard and informed though a PA system regarding the movement of this special train. An ambulance was kept ready at Jubilee Hills to rush the heart to the hospital.

“This is the first time that a dedicated special train was run to transport a heart to save a life,” said HMR managing director N.V.S. Reddy. A team of medical experts exclusively travelled in the special train with the heart.

The heart was harvested from a 45-year-old male farmer from Aregudem, Mothkur, Nalgonda. He suffered from brain stem death due to acute hemorhagic bleeding and was declared brain-dead at Kamineni Hospitls, L.B. Nagar. His heart was harvested at the private hospital and was transplanted on a patient at Apollo Hospitals, Jubilee Hills.

The recipient is a 44-year-old male cardiac patient suffering from dilated cardiomyopathy. He came to Apollo Hospitals in a critical condition about a month and half ago. He had severe heart failure, going into kidney failure, and had low blood pressure. The patient was kept alive with continuous infusion of medicine while searching for a cadaver heart which was found on Tuesday.

“We are always at the service of people and this was a God-send opportunity for us to mobilise our resources towards saving a precious life. I thank Kamineni and Apollo Hospitals for reaching out to us with this benevolent request. We took all safety measures in place to seamlessly facilitate transportation of the heart in a quest to save a life,” said L&T Metro Rail Hyderabad MD and CEO K.V.B. Reddy, in a press release.

A.G.K. Gokhale, senior consultant, Cardiothoracic, Transplant and Minimal Access surgeon at Apollo Hospitals, and his team were performing the heart transplantation on the patient till late evening on Tuesday. Usually, transplantation takes around six to eight hours. 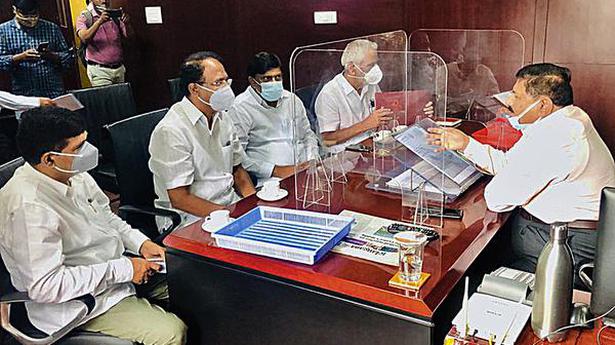