Karnataka
September 14, 2021 Divya Bharat as the consortium that bagged the global tender in 2018 to replace 4.85 lakh street lights with energy-efficient LED lamps is working at a slow pace, BengaluruMembers cutting across party lines in the Legislative Assembly on Tuesday complained about poor street lighting in Bengaluru, resulting in dark spots in several parts of the city.


Members cutting across party lines in the Legislative Assembly on Tuesday complained about poor street lighting in Bengaluru, as the consortium that bagged the global tender in 2018 to replace 4.85 lakh street lights with energy-efficient LED lamps is working at a slow pace, resulting in dark spots in several parts of the city.

Manjunath R. of the JD(S) raised the issue during the question hour and said after the agreement was signed with the consortium, the Bruhat Bengaluru Mahanagara Palike (BBMP) stopped releasing funds for installation or repair of street lights during the last two years and this pushed several areas of the city, particularly those on the outskirts, into perpetual darkness.

He said his Dasarahalli constituency had nearly 6,500 factories and women, especially garment factory workers, felt unsafe in the night without street lights.

Consortium comprising Shapoorji Pallonji and Company, SMC Infrastructure, and Samudra Electronic System, bagged the global tenders and has undertaken the task of replacing the city’s street lights since 2020. It has decided to complete the project in five phases in 30 months.

Senior member Ramalinga Reddy (Congress), Ravi Subramanya and Aravind Limbavali (both BJP), and other members spoke on the issue and demanded that the government take action against the consortium.

Mr. Subramanya said the consortium had been completing work constituency wise and this had led to dark spots in many areas of the city. Villages that were added to the BBMP limits have no street lights, he said.

Chief Minister Basavaraj Bommai said the issue came up during the review meeting and the consortium had been asked to install three lakh new LED lamps by this December-end. Mr. Bommai said a penalty of ₹1 lakh per week would be imposed on the consortium for delay in installation of LED lamps.

The BBMP incurred an expenditure of ₹245 crore per year for operation and maintenance of street lights. The replacement of the existing street lights with LED lamps would save electricity consumption and bring down electricity bills for the BBMP significantly, according to sources.

‘Use technology wisely, with human considerations’ 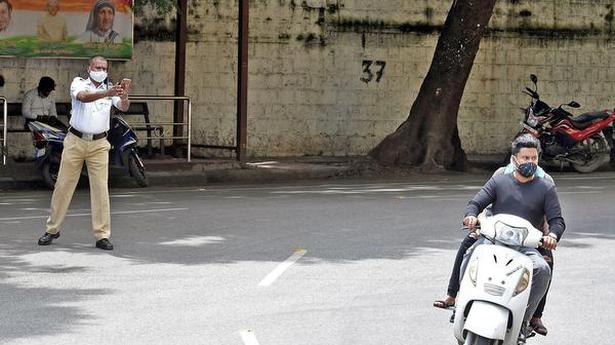 Riding without helmet will now lead to suspension of driving licence