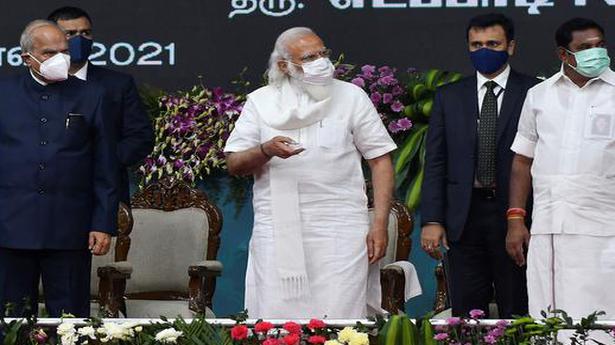 In the presence of Governor Banwarilal Purohit and Chief Minister Edappadi K. Palaniswami, he opened the Chennai Metro Rail phase-I extension, completed at a cost of ₹3,770 crore. He also commissioned the passenger services from Washermenpet to Wimco Nagar. The 9.05-km extension links north Chennai with the airport and the Central railway station.

Mr. Modi also unveiled the foundation for the extension, renovation and modernisation of the Grand Anicut Canal System. The canal is important for irrigation in the Cauvery delta districts. The modernisation of this canal will be taken up at a cost of ₹2,640 crore. “This programme is special because we lay the foundation to modernise the 636-km-long Grand Anicut Canal System,” he said. “The impact of this is going to be very big. It will improve irrigation facilities for 2.27 lakh acres. The districts of Thanjavur and Pudukkottai will gain especially. I want to appreciate the farmers of Tamil Nadu for a record food grain production and a good use of water resources.”

“For thousands of years, this Grand Anicut and its canal systems have been the lifeline of the ‘Rice Bowl’ of Tamil Nadu,” he said. “The Grand Anicut is a living testimony to our glorious past. It is also an inspiration to the ‘Aatmanirbhar Bharat’ goals.”

Quoting Tamil poet Avvaiyar, Mr. Modi underscored the need for water conservation. “When water levels rise, cultivation rises, people prosper and the state prospers. We have to do whatever we can to conserve water. This is not only a national issue. It is a global subject. Always remember the mantra of ‘per drop more crop’. This will help future generations,” he said.

Mr. Modi also inaugurated the electrification of the 228-km single line route from Villupuram to Thanjavur, through Cuddalore and Mayiladuthurai, and the single line stretch from Mayiladuthurai to Tiruvarur. The ₹423-crore project will facilitate a free flow of traffic by obviating the need for a change of traction between Chennai Egmore and Kanniyakumari and will result in a saving of ₹14.61 lakh a day on fuel cost.

“The Villupuram-Thanjavur-Thiruvarur electrification project will be a great boon to the delta districts. One of the major things this 228-km line will do is to ensure a faster movement of food grains,” Mr. Modi said.

In his speech, Mr. Palaniswami said: “I would like to thank the Prime Minister for announcing new National Highway projects, with an investment of ₹1 lakh crore, and improvement of fishing harbours of Tamil Nadu in the 2021-22 Budget. These projects would be a boon to the people of my State.” He also requested the Prime Minister to provide necessary financial assistance for the Grand Anicut extension and modernisation scheme. Deputy Chief Minister O. Panneerselvam spoke. Assembly Speaker P. Dhanapal, Industries Minister M.C. Sampath and Chief Secretary Rajeev Ranjan were among those who took part at the function. 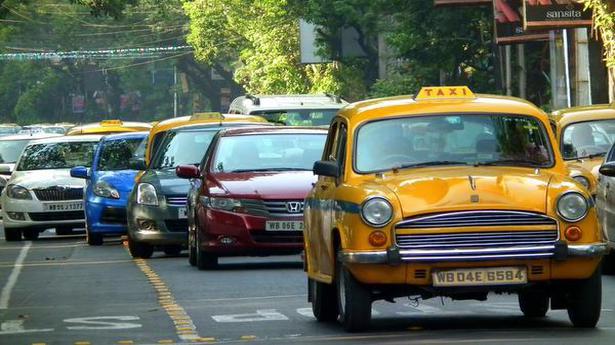 The Hindu Explains | What does ‘green tax’ mean for vehicle owners?