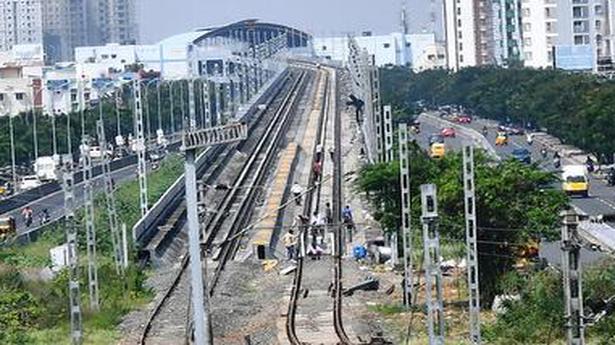 The Southern Railway plans to link the Mass Rapid Transit System (MRTS) from Velachery to St. Thomas Mount railway station by 2022, bringing to an end the long- delayed extension project.

The MRTS extension project has been pending for several years because of legal hurdles in acquiring a 500 m stretch of land near the St. Thomas Mount railway station.

B. Guganesan, chief public relations officer of Southern Railway, said since the Chennai Metropolitan Development Authority (CMDA) had handed over the land, foundation work for the elevated tracks would begin soon and be completed in 18 months. Adambakkam and Puzhuthivakkam railway stations have already been completed along with a portion of the track work. The Commissioner of Railway Safety would inspect the stations and amenities before services are launched.

The MRTS would be integrated with both the suburban and Metro services, Mr. Guganesan added.

A senior CMDA official confirmed that the land had been handed over to Southern Railway, and all legal issues had been sorted out.

“A case was pending in the Supreme Court regarding the compensation amount with a few owners. It was dismissed on Thursday. Even before the final ruling was pronounced, the Supreme Court had given the green signal to go ahead with the land acquisition.”