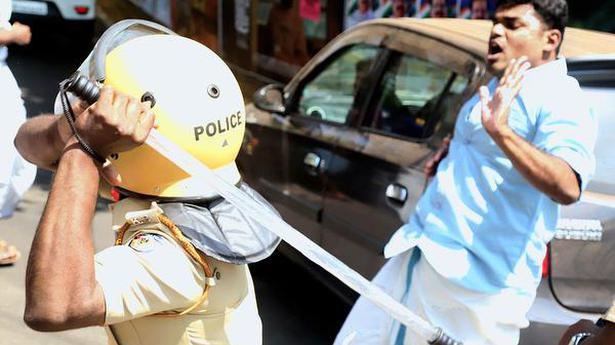 
A march taken out by the Muslim Students Federation (MSF) in protest against the Left Democratic Front (LDF) government’s alleged backdoor appointments and nepotism ended up in a police lathicharge in front of the District Collectorate here on Monday. A dozen-odd protesters and a news photographer were injured in the police action. Satheesh Kumar K.B., photographer of Mathrubhumi newspaper, suffered injuries on his head as a policeman thrashed him despite holding up his camera and showing his media credentials.

A group of MSF workers turned against V.P. Sanu, the national president of the Students Federation of India (SFI), when he made provocative comments against them while addressing a meet to support the farmers’ agitation from a nearby pandhal in front of the Collectorate. MSF protesters destroyed the flags in front of the pandhal. They shouted slogans against Mr. Sanu. The SFI accused the MSF of “shamelessly attacking the farmers’ agitation.” Mr. Sanu said that the MSF attack was against the farmers. MSF State president P.K. Navas condemned the attempts by the SFI and Mr. Sanu to divert the anti-government agitation to an “anti-farmer, anti-SFI attack.”

Journalists protested here against the police attack on the news photographer.

“Assistant sub-inspector Santhosh brutally attacked Mr. Satheesh Kumar even after showing his media identity. It looked like a premeditated and vengeful act from that police officer who had behaved rudely and badly with the mediapersons here several times before,” said K.P.M. Riyas, district secretary of the Kerala Union of Working Journalists.

The protest march taken out by MSF activists to the Kozhikode collectorate flaying the alleged back-door entry of some into government services was almost peaceful.

Though the protesters tried to cross the barricades, the police managed to control them.

MSF leaders said they ensured that only a small number of activists participated in the march to comply with the COVID-19 protocol.

NCD clinics in Kollam to be strengthened