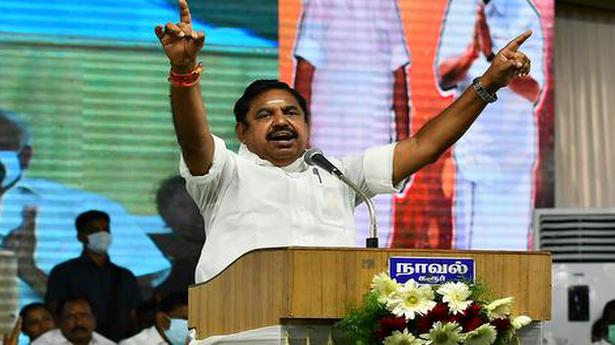 He was speaking after opening a veterinary science college at the Advanced Institute for Integrated Research on Livestock and Animal Sciences (AIIRLIVAS) at Thalaivasal. Minister for Animal Husbandry Udumalai Radhakrishnan and senior officials were present at the function. He said Thalaivasal had been made a taluk.

Mr. Palaniswami said, “The Leader of the Opposition says I am just laying the foundation, and there is no progress beyond it. AIIRLIVAS is an example. I announced its construction. I myself laid the foundation a year ago and now I have inaugurated it.”

The Chief Minister said a ₹100-crore facility would be opened at Karumandurai in the district for research on hybrid breeds of dairy cattle. He said the government tried to establish a cattle sperm research station at Udhagamandalam at a cost of ₹46 crore, but the project was held up by litigation. The work would begin soon as the government had received a favourable verdict from the court.

Earlier, addressing members of the AIADMK women’s wing at Attur, Mr. Palaniswami said it was former Chief Minister Jayalalithaa who provided 50% reservation for women in the local body elections. He said ₹82,000 crore had been given in bank-linked credit to women’s self-help groups.

The Chief Minister said Tamil Nadu was the only State where newborns benefited from welfare schemes immediately after birth, as a kit with 16 products was provided for them. He said Mr. Stalin had moved court and tried to stop the distribution of the Pongal cash gift of ₹2,500, but the government won the case and implemented it.

He said the government did not announce the scheme to help the AIADMK garner votes, but only in view of the hardship being endured by the people.

“I’m not a sorcerer but a ‘doer’ (‘seyalvathi’),” he said. Tamil Nadu had surplus electricity today in contrast to the severe power cuts when the State was under the DMK. “Today, we have created a situation wherein women can live peacefully.”

He said the 2021 Assembly election would be important because it was the first election after the death of Jayalalithaa. The AIADMK was the only party that had formed women committees for each booth, he noted. Every woman should involve herself in campaign, and each woman could get 10 votes