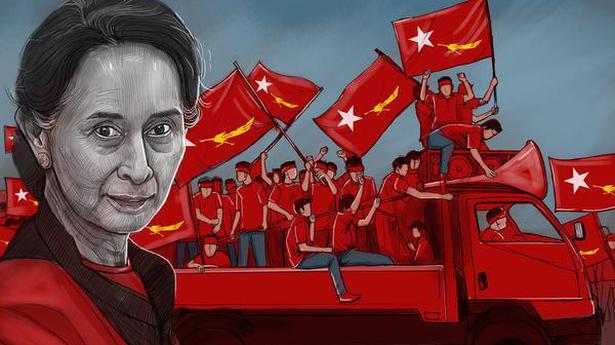 In 1988, Aung San Suu Kyi, who was living in the U.K., travelled to Rangoon (now Yangon), to be with her ailing mother. Gen. Ne Win, the long-time military dictator of Burma (now Myanmar), had stepped down. Demonstrations erupted across the country (on August 8, 1988, which is called the ‘8888 Uprising’), demanding democracy. The junta unleashed a violent crackdown on the protesters. Universities were closed down and students were shot dead. Many of the wounded were taken to the hospital in Yangon where Ms. Suu Kyi was attending to her mother. For the daughter of Aung San, who fought against both the British colonialists and the Japanese imperialists and founded the Burmese military, the brief stay in the hospital gave a closer view of the military regime that had been ruling her country since the 1962 coup.

The protesters, mostly students, wanted a leader against the junta. In a country where Aung San, who was assassinated in 1947 at age 32, is widely revered, they would not have found a better name than Aung San Suu Kyi to lead their campaign for democracy. Ms. Suu Kyi agreed to address the protesters. On August 26, 1988, half-a-million people showed up at the capital’s famous Shwedagon Pagoda, to listen to her. “I could not, as my father’s daughter, remain indifferent to all that is going on,” she told the crowd, in a speech that would change not just her destiny but also that of her country. “This national crisis could in fact be called the second struggle for national independence.”

She couldn’t stop the military. Within a month, a new junta, the State Peace and Development Council (SPDC), would take over. But the struggle she launched would never cease. As the Generals were trying to regain control, Ms. Suu Kyi helped found the National League for Democracy (NLD), the most potent political rival to the military till date. On February 1 this year, when the military staged another coup preventing the new Parliament, elected in the November 8, 2020 election, from holding its first session, the soldiers naturally went after almost all the top leaders of the NLD, including Ms. Suu Kyi and President Win Myint.

The party was founded on September 27, 1988, a week after the SPDC was formed. Tin Oo, a former Commander-in-Chief of the Burmese military who was forced to retire and jailed, and Aung Shwe, a former Brigadier-General, joined hands with Ms. Suu Kyi. Mr. Tin Oo was the first president of the party, while Ms. Suu Kyi served as the general secretary for years. The NLD, a liberal, social democratic party, demanded the junta give up power and initiate the country’s transition to democracy. The junta detained Ms. Suu Kyi, Mr. Tin Oo and other NLD leaders in response. But under domestic and international pressure, the SPDC agreed to hold polls in 1990. The NLD swept the polls, winning roughly 58% of the popular vote (382 seats in the 492-member Assembly), while the National Unity Party, a proxy of the military, won only 10 seats. Expectations were high that Myanmar’s ordeal was coming to an end.

Also read: Explainer | Why did the Myanmar military stage a coup?

But the Generals had other plans. They annulled the results, arrested several lawmakers and detained Ms. Suu Kyi again at her house on the University Avenue in Yangon. Between 1989 and 2010, she spent about 15 years under house arrest. Now, after 10 years of freedom, including five years in power, Ms. Suu Kyi is back in detention.

Even in the face of increased state repression, neither Ms. Suu Kyi nor the NLD did compromise on their most vital demand — the end of the military rule. The Generals knew that Ms. Suu Kyi was the greatest threat to their hold on power. She has been immensely popular. People referred to her ‘The Lady’, when uttering her name angered the rulers. The junta promised her freedom if she agreed to leave the country. She didn’t. The junta did not allow Suu Kyi’s husband Michael Aris, a historian of Burmese and Himalyan culture, to visit her even when he was battling cancer. She didn’t leave the country because of fear that once she left she would not be allowed to come back. In 1999, Aris died, with his dying wish unfulfilled.

The NLD, in the face of a hostile junta, built a centralised party organisation. Ms. Suu Kyi assumed party presidency in 2011, a year after she was released from house arrest and in the wake of political reforms initiated by the transition government of President Thein Sein. She is now the chairperson. Mr. Tin Oo remains a patron. The NLD has two vice-chairpersons, a two-member secretariat and a 16-member central executive committee, which is the main decision-making body. It also has several working committees such as the women working committee and youth working committee and networks.

For years, the NLD remained a defiant political movement that rode the wave of resentment against the junta. In 2007, a series of protests broke out in Myanmar (popularly called the ‘Saffron revolution’ as Buddhist monks were in the forefront of the agitation) against the regime of Gen. Than Shwe, which was brutally cracked down. It was also the time when the military’s grip on power was loosening. International sanctions prevented the country’s economic rise, while the rest of Asia was marching ahead. Myanmar was seen increasingly dependent on China. Pressure was mounting both inside the country and abroad. In 2008, the military adopted a new Constitution that promised semi-democracy. Gen. Than Shwe, who was in mid-70s, agreed to hold elections in 2010. The NLD initially rejected the Constitution and boycotted the polls. The pro-military Union Solidarity and Development Party (USDP) won the election and the retired General Thein Sein became the President. He initiated political reforms. The government released Ms. Suu Kyi and other political prisoners, relaxed media censorship and promised transition to democracy.

President Thein Sein wanted the NLD’s participation for legitimacy for his reforms. In August 2011, he met Ms. Suu Kyi for dinner. Later that day, she told Mr. Tin Oo, “I have the feeling that I can work with him.” The NLD later recognised the Constitution that has reserved 25% of the seats in Parliament and three key Ministries in the government — Defence, Home Affairs and Border — for the military, and agreed to contest the election. In the 2012 byelections, the NLD won 43 of the 44 seats it contested. Ms. Suu Kyi was elected to Parliament from Kawhmu. It was only the beginning.

The NLD won an outright majority in the 2015 Parliament elections. But Ms. Suu Kyi cannot become President under the current Constitution as her children are foreign citizens. Win Myint, a long-time NLD leader and a former political prisoner, became the President. The party, with its majority, passed a law creating a new post of State Counsellor for Ms. Suu Kyi. But the fundamental contradiction between an Army that never wanted to fully relinquish power and a political party that is dedicated to democratise and rebuild Myanmar was never resolved. The NLD continued to call for constitutional reforms, which the military found as a direct threat to its interests.

Ms. Suu Kyi initially offered peace to the country’s various ethnic rebel groups. But she didn’t have the powers to keep the promises. Instead of challenging the Generals, the NLD opted for tactical cooperation. On the Rohingya issue — over 700,000 Rohingya Muslims were forced out of the country since 2017 by a military crackdown on the Rakhine state — she toed the military line, at least publicly. She once told Hillary Clinton that she did not want to be an icon. “I have always been a politician.” But even her cold political pragmatism did not help Suu Kyi tackle the country’s power-hungry Generals.

The November 2020 election was a turning point. The NLD won another landslide, while the USDP, the military proxy, suffered a humiliating defeat. The USDP alleged voter fraud. The military backed those claims, without offering any evidence. Since then, tensions were on the rise and fears of another coup were in the air. Those fears came true in the early morning of February 1 when the military chief Min Aung Hlaing ordered the soldiers to detain the country’s elected leaders. The military has declared a state of emergency, handing power to the Generals. For the NLD, which was born out of the popular resistance against the junta’s power grab, history has come full circle.